Cid Pollendina: Oh, shut up and help me remodel the Cid (Unlimited) page!
Please expand this article into a full one. The following tasks need to be completed:

Cid, known as Sid in Japanese materials, is a minor character in Final Fantasy: Unlimited. Being the anime's Cid, he is rather different in appearance from the recurring Cid in the game series in that he is rather young. However, his wizardry in mechanics remains.

Cid is a cheerful, optimistic, and energetic technician, a wizard at anything electronic. A member of the Comodeen, he spends most of his time, building, maintaining and piloting his many inventions. He has the unusual habit of naming his machines with female name, and treating them as if they were alive.

When ever they are damaged, the normally timid technician will fly into a rage, activating his Ultimate Hammers to destroy whoever or whatever has brought harm to them.

He is well versed in things other people know little about, such as flight water, Soil, and a number of other objects and phenomena of Wonderland.

Not much as been revealed of Cid's back story, but what is known is that some time ago his world was destroyed. When the Comodeen noticed his exceptional mechanical skills, they recruited him in their war against Chaos. When ever the Comodeen is seen in the first section of the series, Cid will not be far away, usually working on a gadget or machine of some description.

In the second part, after the submarine Jane sets sail, he becomes much more influential as the pilot of the ship. He often assists the Comodeen with his various machines, solving otherwise impossible problems with a few key strokes, such as building the airship Silvia to allow the Comodeen to approaching the flying fortress Gaudium, or hijacking the defensive satellite protecting the fortress and many other tasks.

Cid is a magnificent inventor and has created many gadgets and items, big and small. His creations all have names, or the series will be named. Each one was built for a specific purpose, and most function well for that task.

A draining pump used by the Comodeen to fend off the Wandering Ocean that attacked the Cactuars in a desert world. It was destroyed after the trio proved ineffective against such a large volume of water.

A water sled used to escape the attack on the Comodeen. It was used by Cid, Lisa, Ai and Yu to escape Makenshi's battle with Kaze in the Comodeen's first base. It was destroyed by Kaze firing on Fungus a short while later.

A large-sized battery used by the Comodeen to power up Cordelia and Marianne to fend off the Wandering Ocean that attacked the Cactuars in a desert world. It was destroyed after the trio proved ineffective against such a large volume of water.

Cranes used to collect flight water in Teros. There are ten in the series, with most being destroyed by Pist, and the final few when Kaze and Pist fought.

A dehumidifier used by the Comodeen to fend off the Wandering Ocean that attacked the Cactuars in a desert world. It was destroyed after the trio proved ineffective against such a large volume of water.

A healing machine used to cure the protagonists. A larger one is found on Jane. The smaller one was used to cure Chobi when the group first met Cid, while the larger was used to hijack a defensive satellite guarding Guadium.

The name of the Interdimensional Train that Yu, Ai and Lisa ride in the first half of the series. It appears to be sentient, as it has numerous eyes located in various places around the structure, and when Omega attacks it, it seems to panic and speeds up. It draws its power from a shard of Omega, which Cid mistook for antimatter, and as such it is constantly under attack from the rest of Omega, who is constantly trying to rebuild itself. Though Cid created the train, he never got to ride Elizabeth and was heartbroken when he learned that Omega had destroyed it.

Chobi wears this clock that tells when Elizabete will depart, and can also use it to pin point its current position. Oscha has tampered with Isabelle at some point, fitting it with a tracking device which allowed him to track Ai and Yu's position via their companion.

Jane is the most seen creation of Cid; being the submarine the party spends the second half of the series aboard. Cid built it so that he could reach Teros; a place where a vast amount of flight water is located. The flight water is necessary to power his airship, Silvia.

It is powered by a Wonderland native substance known as Ellenium, which exists in the water, thus removing the need to refuel. This does come with some dangers though; Ellenium is unstable and will detonate if the ship is running its engines when the Ellenium is too dense. To accommodate for this, Jane is also fitted with oars, to allow the ship to pass through these fields at a controlled speed and direction.

Silvia is Cid's pride and joy; an airship that was designed to allow the Comodeen to attack the flying fortress Gaudium. The major drawback of such a machine is its power source; the rare, powerful and valuable flying water is needed to lift the craft from the ground. Flying water exists only at Teros, and thus Jane was created to reach Teros, and allow Silvia to run.

Silvia is seen only twice in the original anime; once docked, before Jane departs, and once in flight during the end credits of the final episode. 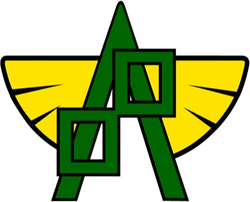 Cid uses a mark that is printed on his arm and on his devies. It contains yellow wings with the letters "S" and "D" overlaid in Wonderland script in green. These letters are the consonants in the name "Sid".

"Genius Scientist Cid" (天才科学者シド, Tensai Kagakusha Shido?) is the character theme associated with Cid. The track has been played when Cid replaced Fabula as the narrator of an episode's preview. It is the thirtieth track in the Final Fantasy: Unlimited - Music Adventure Verse 1 and is composed by Akifumi Tada.