Cid Pollendina: Oh, shut up and help me remodel the Cid (Record Keeper) page!
Please expand this article into a full one. The following tasks need to be completed:This request can be discussed on the associated discussion page. Remove this notice upon completion. 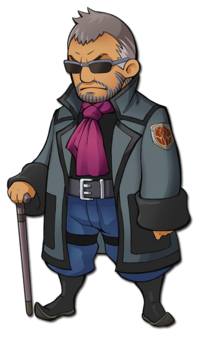 Cid is a non-player character in Final Fantasy Record Keeper. While his exact origins and story are unknown, Cid is a good friend of, and serves as an assistant to Dr. Mog throughout the game. An expert in the mechanics of leveling and synthesis, he is the operator of a lab in the Royal Archives, where players can upgrade and refine acquired equipment as well as craft and refine new battle Abilities for Tyro and the rest of the cast of Heroes in the game.

As of February 18, 2016, Cid is also the curator of the game's Missions feature, where he will present mission quest summaries and their rewards on a postboard for later viewing.

Cid is a rough-cut and stocky tan-skinned man appearing in his forties or older, with short, dark gray hair spiked at the front. Dark glasses cover his eyes. He wears blue and black trousers, cinched with a wide belt, and black boots with a black shirt, and a plum ascot around his neck and over his shirt. A dark gray blazer with black accents and a patch on the left sleeve completes the outfit. He holds a walking staff in his right hand.