Cid is a Hume who resides and owns a laboratory in the Republic of Bastok in Final Fantasy XI. Cid plays a key role in many Bastok quests and missions. He takes a more prominent role in the Chains of Promathia expansion pack and begins to develop his own version of the Jeuno airship. He also helps the adventurer work with Prishe and the others to try to intervene with Bahamut's assault. Cid is rugged and muscular in appearance. Cid is a recurring character in the Final Fantasy series, usually playing a very different role in each game.

In addition, in the on-going storyline centering around Chains of Promathia, Cid takes a prominent role in helping to invent airships, which gives him more of a link to previous Cids of other Final Fantasy worlds.

Cid has one known son by the name of Midras (a.k.a. "Junior" or "Mid"), who currently residences in Adoulin. 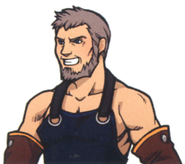