Boy, don't forget those words... 'cause if you do, I'm gonna make you regret it.

Cid to Tidus on the Fahrenheit

Cid is a non-player character in Final Fantasy X. He is the leader of the Al Bhed faction and captain of the Fahrenheit, an airship excavated from the depths of the ocean. He is Rikku and Brother's father, and Yuna's maternal uncle.

Cid is loud and boisterous, traits that passed onto his son, and is impulsive and quick to anger. He is proud of his machina airships and was responsible for building the Al Bhed base, Home, on Bikanel. According to the Final Fantasy X Ultimania Omega he is 37 years old during Final Fantasy X.

Cid is bald with the word "Love" tattooed in Al Bhed on his head. He has black eyebrows, green spiral pupils, and some dark facial hair. He dresses like most other Al Bhed, in a yellow and brown dive-suit type outfit with green belts and a collar, with blue elbow-length gloves and blue shoes. He has goggles hanging around his neck but is never seen wearing them.

You Rikku's friends? Well, just don't stand there, come on! Let's go kick those Guado out of our Home!

Cid has a gung-ho type personality, always ready to fight for what he believes. He was angry when his sister married a Yevonite, Braska, and stopped speaking to her, but this changed after Yuna's birth. He is protective of his children and niece, and is against Yuna becoming a summoner, even going as far as to say to Auron that allowing her to perform the Final Summoning would be like killing her themselves. He goes to the extreme at times, even wanting to crash the airship into Sin, killing them all, though Rikku stops him.

Cid is old-fashioned. In Final Fantasy X-2 he falls out with Brother when his son refuses to see things as he does and focuses on his own life. Cid also disapproves of Yuna and Rikku's occupation as sphere hunters, believing the pair should seek to get married instead. Cid shows his entrepreneurial flair by starting up a tourism business in the Zanarkand Ruins, but seeing Yuna disapprove of what he has done makes Cid see the error of his ways. He becomes temporarily depressed and seeks time alone. Upon reuniting with his children, he is back to his bossy ways ordering the reluctant Brother and Rikku around, despite being grown up.

No hare-brained law or teaching can send my little niece to her death! When I save her, I'll make her give up being a summoner quicker than a desert melts ice!

Cid and the Al Bhed were visited by a Yevonite, Braska, who fell in love with and married Cid's sister, a situation that proved disastrous for both: Braska was cast out of the clergy of Yevon, and Cid disowned his sister, though he relented after Yuna's birth and intended to welcome his sister back with open arms. However, Cid finds his sister killed during an attack by Sin, with Braska embarking on a pilgrimage to defeat Sin with the Final Summoning, leaving the 7-year-old Yuna to be raised by the temple and the villagers of Besaid.

Ten years later, Cid has his children salvage the ancient Fahrenheit airship from the bottom of the ocean. Motivated by the loss of his sister and brother-in-law, Cid orchestrates the Al Bhed's abduction of summoners to stop them from sacrificing themselves to bring about the Calm. His daughter Rikku attempts to kidnap Yuna, now a summoner, but ends up joining her pilgrimage, albeit still adamant Yuna should quit. When the Guado attack Home, Cid orders their base's destruction without a second thought as everyone escapes on the Fahrenheit.

After a brief confrontation with Tidus, one of Yuna's guardians, Cid agrees to help the party rescue Yuna at Bevelle before flying off after the damage the airship received. Later, with the airship fully repaired, Cid picks up the party at Zanarkand after they end the Final Summoning tradition, hiding his feelings of finally meeting Yuna and seeing her safe and sound. Prior to the final battle with Sin when Wakka, another of Yuna's guardians, makes his apologies for his previous prejudice against the Al Bhed, Cid accepts, emphatic due to his own personal history with hating Yevon followers. Cid supports the group as they attack Sin head on and destroy it from the inside.

What, you got a bone to pick?

Cid to Rikku about Zanarkand

At the beginning of the Eternal Calm Cid's inability to adapt to the new age causes him to fall out with his children as he works to restore Home. The sleeping quarters of the Celsius has an angry picture of Cid with a dart at his head, presumably placed there by Brother.

Two years after Sin's defeat, Cid makes Zanarkand a tourist attraction to fund Home's restoration. When the Gullwings find out about his business, Rikku tells him what he is doing was like turning the ruins of Home into an amusement park.

Realizing that his people are more focused on their futures than Home's restoration, Cid shuts the tourism down and retreats to the Thunder Plains to spend time alone. He explores a cave that he came across, only to get injured. The Gullwings save Cid with Brother forced to allow him aboard the Celsius, the Gullwings' airship. Though he mainly stays in the engine room looking the airship over, Cid gets into a heated argument with Rikku and Brother over traditions before making himself at home in the airship's bar.

Cid is mentioned to have started a new business with O'aka at Mt. Gagazet's hot springs, another scheme to make money to rebuild Home. The business is in poor success, however.

Cid partakes in a boss battle against Evrae and Sin's left and right fins where the player can use Trigger Commands to instruct him to move the airship and attack with Guided Missiles.

Cid is voiced by Koichi Sakaguchi in the Japanese version. In the English version, he is voiced by Michael McShane. 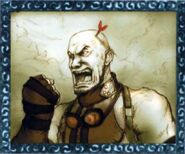 A portrait of Cid with a dart embedded in it.

Nhadala talking about Cid's idea to rebuild the Home.

The Gullwings save Cid from a cave.

Cid argues with his children on the Celsius.