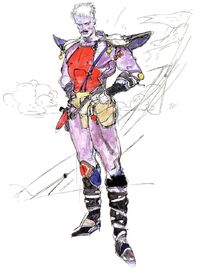 Originally, Cid served as a white knight of Fynn, but gave up that life for his airship. Cid has set a transport business at the town of Poft with his airship, using the money charged for the flights to maintain it. During Firion and his allies' quest to destroy the Dreadnought, Cid tells Firion that airships are powered by Sunfire, and that a lack of control of it would cause any engine to explode. After Firion and his friends obtain the Sunfire at Kashuan, Cid and Princess Hilda attempt to meet them there, but Cid's airship is captured by the Dreadnought itself. The rebels succeed in infiltrating the Dreadnought and rescuing both Cid and Princess Hilda and destroy the warship.

Later, Cid is fatally injured during the onslaught of the Emperor's Cyclone, and is taken to Paul's home in Fynn. After the Cyclone is destroyed, he summons Firion to his bedside and gives him the airship, telling him that he will need it to enter Palamecia Castle to stop Leon.

However, Cid's soul travels to Machanon with other people who have perished fighting the Empire. Cid joins the fallen white knights of Fynn to aid the perished civilians escape the monster-filled Raqia caverns and set up a small town beyond the passage inside. When Minwu, Scott, Ricard and Josef leave Raqia, they arrive at Machanon as well, and meet Cid, who also offers them advice on their quest.

Cid appears in Final Fantasy Trading Card Game with artwork from Final Fantasy I & II: Dawn of Souls. His card is of the wind element.

Retrieved from "https://finalfantasy.fandom.com/wiki/Cid_(Final_Fantasy_II)?oldid=2042574"
Community content is available under CC-BY-SA unless otherwise noted.