Final Fantasy Wiki
Register
Don't have an account?
Sign In
Advertisement
in: Characters in Chocobo Racing, Characters in the Chocobo series, Cid, Chocobo to Mahou no Ehon: Majo to Shoujo to Go-nin no Yuusha Characters
English

Cid is the recluse inventor in the village where Chocobo lived. He lives in Cid's Tower, away from the village since the inhabitants did not like the presence of humans in their village. When Cid's Tower was taken over by monsters, Cid enlists Chocobo to help him. As gratitude for his assistance, Cid helped the bird in many of his journeys, producing submarines and airships for his use. As a party member, Cid is a mostly physical fighter with high HP, using his wrench in combat. When asked, Cid can plant mines on where he is currently standing.

In Chocobo's Mystery Dungeon: Every Buddy, he makes a cameo appearance in Chapter 3 after the Guardian of Water dungeon is revealed and also after clearing Shiroma's dungeon. He is again found at the Empty House in the Residential District. Completing his dungeon unlocks his buddy for use. Because the enemies are much stronger than Shiroma's dungeon, it is best to wait until you reach level 55.

Cid is the ingenious inventor in the village where Chocobo and his friend Mog live. He invented the Jet-Blades for Chocobo, completely forgetting that Mog had commissioned a racing machine from him earlier. He cooked up a scooter bike later for Mog.

He does not participate as a racer, but is rather the narrator of the story and the mechanic who repairs the racer whenever they fall down ledges or gaps in the course. However, he can be unlocked as a secret character by completing Story Mode several times; he races in his tank. His top speed is even slower than Chubby Chocobo's but his cornering is on par with Chubby Chocobo's. As a CPU racer, he uses every stone he gets until he gets one in 5th or 6th place in which he keeps one type of attack stone. His theme is a remixed version of Cid Pollendina's theme.

Cid is an inventor who created the airship. He is said to have moved to the big-city, faraway from the island where Chocobo and the others lived. However, when Chocobo contacts Cid using the self-destructive machine in his room, Cid arrives on his airship lending his assistance.

Cid is a more slender, blond young man with glasses. 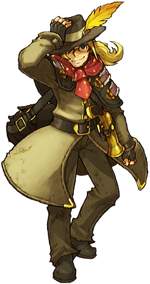 Cid is a gifted inventor who travels the world with Chocobo as treasure hunters. A determined adventurer who will invent great gadgets to obtain whatever he wishes. In his quest to find a treasure that can change the world, he and his partner stumbled upon the town of Lostime. He hears the Bell of Oblivion and forgets everything, including who he is.

Cid strains to remember, but ends up causing himself pain in the process. Chocobo and Raffaello enter and restore his memories. He wanted to find Timeless Power because it might finish his airship, a dream he, his dad, and his grandpa shared. His grandpa went looking for Memoria but never returned and his grandpa's almost completed airship went missing.

Cid is the owner of Million Island, which he bought for one million gil. He is a genius in writing picture books, and has the power to change the story books by writing in them. While penning his latest book in the Alvanica illusion picture book series, he succumbed to an unknown disease. He told one of his friends that he wants to write 100 books.

Cid is voiced by Matthew Mercer in the English version of Final Fantasy Fables: Chocobo's Dungeon. He is voiced by Austin Lee Matthews in Chocobo's Mystery Dungeon Every Buddy!.

In Chocobo GP, Cid is voiced by Keith Silverstein in English and Riki Kitazawa in Japanese.

He is also seen in Chocobo Stallion and Hataraku Chocobo. 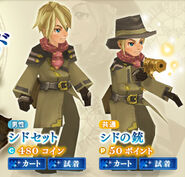 Cid from Majo to Shoujo to Go-nin no Yuusha. 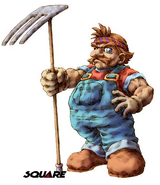