Cid is a playable character in Final Fantasy Brave Exvius. He is a physically-geared dragoon whose role in battle is to deal damage, but who is able to cast some Black Magic. He has two variants: "Veritas of the Heavens", based on his appearance during Season One, and the simply-named "Cid", where he sheds his armor and is one of the best 'finishers' in the game. In both variants, he's heavily geared towards Jumping.

Veritas of the Heavens[edit | edit source]

Veritas of the Heavens (天風のヴェリアス, Tenpū no Veriasu?) is a 4-6★ Rare Summon, available for summoning since the event Memories from the Battlefield (which originally ran in August-September 2017 in the Global version). His job is listed as Veritas, and his role is Physical Damage. His Trust Master reward is Sworn Six's Pride - Wind, a passive ability that increases the equipped unit's ATK by 50% if wielding a spear and boosts damage of Jump attacks by 25%.

Veritas of the Heavens is basically a Dragoon, as several of his attacks focus on continuous jumping. By using one of his "Spineshatter Dive" attacks, he can use the 'next level' with the added benefits of reduced delay and increased damage. Although they can be used without building up, they will inflict less damage and with a much extended turn delay. These Jump abilities are strong in their damage multiplier, but they are not very practical until refined by his enhancements. Otherwise, he is a decent chainer with "Heavenly Wind", although he can only properly chain with himself.

His awakening materials are the following:

Veritas of the Heavens' stats at his highest levels are as follows (with no passive abilities taken into account), along with the maximum amount of stat points that can be increased through pot-enhancements:

Depending on his rarity, Veritas of the Heavens has either three (4★) or four (5-6★) ability slots. He has affinity to Black Magic (Lvl 5-8).

While he has no innate elemental or status resistances, his passive trait "Heavenlord" allows him to absorb all types of Wind-elemental damage (though, if he is equipped with Wind-resistant equipment, it will reduce the amount of HP recovered by this skill). "Clear Mind" nullifies Blind and Confuse.

Veritas of the Heavens has four traits that can be enhanced: all his Spineshatter Dive jumps, and Heavenlord.

Cruel Punishment (慈悲なき天刑, Jihinaki Tenkei?, lit. Merciless Sentence) is Veritas of the Heavens' Limit Burst and a damage-type ability. It inflicts unmitigated physical damage and casts a high Wind imperil, that lasts for three turns, to one enemy. Depending on its rarity, it deals either seven (4★), eight (5★) or ten (6★) hits.

Its damage modifier and how much the enemy's resistance decreases will depend on Veritas of the Heavens' LB level:

Veritas of the Heavens can equip the following weapon types: daggers, swords and spears.

Cid (シド, Shido?) is a 5-7★ Rare Summon, currently available in the JP version. His job is listed as Sworn Eight, and his role is Physical Damage. He has no innate element or status ailment resistances. His Trust Master reward is the Hero's Vow - Wind, which boosts Equipment ATK and Accuracy when equipping a single weapon, as well as boost Jump damage and boost the LB gauge fill rate. His Super Trust Master Reward is the Sky Feather, a powerful wind spear with 175 ATK.

Cid overall behaves much like his armored counterpart, focusing on Jumps for damage. There are notable differences, however. His jumps' strongest forms unlock via his Cooldown ability rather than from building a consecutive build up of specific abilities. His Jumps now have different effects each, as they can inflict status debuffs, heal his HP/MP, decrease wind resistance, etc. By far and lot his greatest upgrade is the fact his Jumps are timed, which means Cid will not descend without manual activation, which by proxy makes him much more friendly to use for chain capping as the player can choose when the attack will strike.

Although Cid needs some external support to be used to his fullest, namely external elemental imperils or imbues, along with chainers to cap with, the massive damage he's able to inflict, more than compensates the setup needed. Even without it, he's a competent damage dealer on his own right.

His awakening materials are the following:

Cid's stats at his highest levels are as follows (with no passive abilities taken into account), along with the maximum amount of stat points that can be increased through pot-enhancements:

Cid has four ability slots. He has affinity to Black Magic (Lvl 7-8). 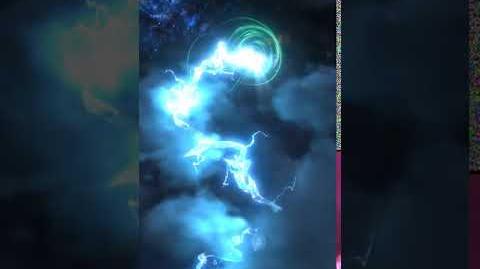 Invincible Highwind (インビンシブル・ハイウィンド, Inbinshiburu Haiwindo?) is Cid's Limit Burst. As one of the so-called 'CG units', Cid's Limit Burst is a powerful ability preceded by a FMV-like movie that lasts about 0:09 seconds. He utters a word "mairu" (参る?, "Here I come").

Its damage modifier will depend on Cid's LB level:

No. 1284 Cid (7★).
Add a photo to this gallery
Final Fantasy Brave Exvius characters
Retrieved from "https://finalfantasy.fandom.com/wiki/Cid_(Brave_Exvius)/Gameplay?oldid=3234149"
Community content is available under CC-BY-SA unless otherwise noted.