Kengo Takanashi
Ciaran, also known as Kieren, is the official name of the male Clavat from Final Fantasy Crystal Chronicles, and its representative used in other media. Final Fantasy Crystal Chronicles has no fixed main character and the player is required to choose the race and name of their character. Each of the race/gender combinations were given their own names and personalities in supplementary material, however, none of these were used in-game.

In the manga, the male Clavat is instead named Fox (フォックス, Fokkusu?). All other characters keep the same name.

This name is the default name for the male Clavat, however the English version translates it as "Kieren".

Joining a crystal caravan to protect the people from the poisonous Miasma covering the world, this young Clavat boy seeks out the Myrrh that can bring back the Crystal's light. So begins an eye-opening journey into the outside world...

Ciaran appears as a playable character and is the representative of Final Fantasy: Crystal Chronicles. He can be available from the start by transferring save data from the second demo. However, if the player did not select him among their party of four, or download the demo, he can later be unlocked by collecting Green Crystal Shards.

He is a Defense oriented character. His Limit, Soulshot, deals damage in proportion to his Stamina and Spirit. 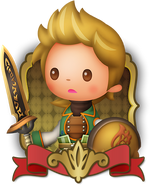 Ciaran is represented on a fire card.