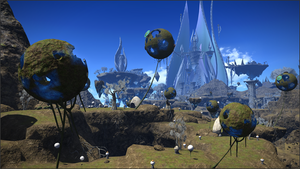 The Churning Mists is a location in Final Fantasy XIV: Heavensward.

The Churning Mists lies in the floating landmasses above Dravania. It is principally the home of the Dravanian Horde, and the only way to access this place is through Sohm Al.

There are two Aetherytes: in Moghome in the southeast, and at Zenith in the west.

A previously undiscovered moogle village atop the peak of Sohm Al.

A grand tower constructed a millenium ago as a roost for the Great Wyrm Hraesvelgr. since the beginning of the Dragonsong War, upkeep is done by moogles.

This aerial zone may exhibit any of the following weather conditions:

The Void Ark can be periodically seen flying to the north in the zone.

The lair of the great wyrm Nidhogg. This floating structure is permanently cloaked by a swirl of storm clouds, leaving the interior structures barely visible.

"Landlords" plays during the daytime. At night, it switches to the piano rendition, "Skylords".

The Aery, as seen from Zenith.

This section about a location in Final Fantasy XIV is empty or needs to be expanded. You can help the Final Fantasy Wiki by expanding it.
Final Fantasy XIV setting
Retrieved from "https://finalfantasy.fandom.com/wiki/Churning_Mists?oldid=3336831"
Community content is available under CC-BY-SA unless otherwise noted.