This article is about the Chocobo series character. For the Final Fantasy VIII summon, see here. For the Fat Chocobo, see here.

Clair (クレール, Kurēru?), also known as Chubby Chocobo (デブチョコボ, Fat Chocobo?), is a recurring character in the Chocobo series. He is a large white chocobo with colorful plumage on his chest.

Clair resides in various floors of both of the first two dungeons, disguised as a white mage, and offering help and tutorials. He also runs a shop in the town, but Poulet doesn't realize they're the same person until the end where he assists him during the final battle.

Chubby Chocobo is the resident of Gingerbread Land. He races in the Phat-Burner Plus, a tricycle that has a slower top speed compared to almost all racers in exchange for unmatched cornering. A greedy chocobo with a voracious appetite, he eats everything, including a Blue Crystal. When Chocobo finds this out, he invites Chubby to follow them.

Chubby Chocobo uses "Receive" to absorb the effects of a magical stone and turn them into one for his disposal.

Chubby Chocobo appears as an NPC in an early dungeon helping Shirma. He later returns to the village and sells Chocobo items. His shop also contains shortcuts through the dungeons.

Chubby Chocobo (Known as Debu Chocobo) is the Shop Keeper who sells Magic Stones. He wears a classic summoner costume.

Chubby fled from the war-torn countryside with his older brother, Peekaboo. The two were separated with Chubby being taken in by Shirma along with Chocobo, while his brother came to serve Irma. Chubby is rescued from his chocobo card when Bebuzzu spits him out. Shortly thereafter, he reopens the gates to Mt. Magma after eating a meaty meal. Before returning to the farm, he gives Chocobo the magical magnifying glass that reveals the requirements for unlocking secrets within the magical picture books. He spends the rest of the game at the farmhouse, offering support and thinking about food.

Clair is a racer in the game and part of the story mode.

This section in Chocobo GP is empty or needs to be expanded. You can help the Final Fantasy Wiki by expanding it. 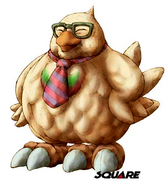 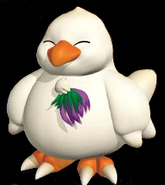