Abilities:
Temporal Void (I-III)Passive:
Physical attack counter rate: 36%
Chrono Dragon is a neutral-elemental Eidolon from Final Fantasy Dimensions II. He can be obtained as a signet for Morrow to equip for completing the finale quest of the "Eureka" arc, "Supreme Primal and Fayth".

Chrono Dragon's signet is one of Morrow's strongest signets, providing him with a large boost in HP, while providing balanced boosts for his remaining stats. The signet teaches Morrow the Temporal Void abilities, which can be useful when facing solo enemies in post-game challenges, allowing him to inflict up to eight consecutive physical attacks to an enemy.

The only drawback to Chrono Dragon's signet is that its passive of increasing Morrow's counter rate by 36% only is worthwhile if the player wishes to deal extra minor damage to an enemy. Depending on player preference, Chrono Dragon can easily be swapped out with the Bahamut or Cherry signets.

Chrono Dragon's signet artwork is based on his in-game sprites. He is a massive gray skeletal mechanical dragon with ethereal wings.

The final artwork depicts Chrono Dragon with a darker shade of silver and the recesses throughout his body begin to shine with an emerald light. Lastly, his ethereal wings change to a flurry of rainbow colors, referencing his role as a Prismatic God.

There were two Chrono Dragon signets in the original free-to-play versions.

The first was a rare signet that could only be obtained through participating in "The Dragon That Passes Through Time" raid event during the game's time as Final Fantasy Legends: Toki no Suishō. The signet automatically came at rank 8 and could not be upgraded. It allowed the wielder to use Chrono Break abilities and could be equipped by all party members. This version used Chrono Dragon's sprite as the artwork.

The second signet was released during the final months of Final Fantasy Legends II. The second Chrono Dragon signet could only be obtained by participating in "The Darkness of Odium" raid event. This version taught the same abilities as in the premium release, although had passives that protected against speed down, stop, and delay. The second Chrono Dragon signet was a SSS signet and could be equipped by all party members. 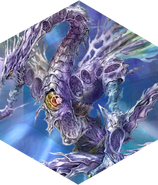 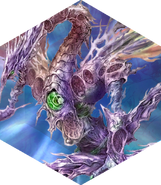 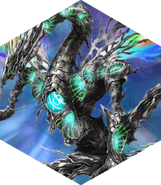 [view · edit · purge]Chronos is the personification of Time in pre-Socratic philosophy and later literature. Chronos was imagined as a god, serpentine in form, with three heads—those of a man, a bull, and a lion.