Cloud: I couldn't finish 'em. Looks like this's gonna get complicated.
The following tables are incomplete and require the stock entries to be filled. If you wish, please examine the table and add anything missing. Remove this notice upon completion.

Chocolina is a non-player character in the Lightning Saga. A little chocobo with a strong will, she was purchased by Sazh Katzroy for his son Dajh, but Sazh never had a chance to give her to his son before the Purge. In the interim, Chocolina accompanies Sazh and lives in his afro.

She is known as Chocolatte in World of Final Fantasy.

The chocobo chick travels in Sazh's hair. Though it has only been with Sazh for a short while, a strong bond has formed between them.

The chick has no name, as voicing the true identity of the animal might trigger ripples of destiny across Cocoon and cause a hurricane in Eden. Either that, or Sazh just hasn't thought of one yet.

Sazh purchased this chocobo chick at a stall in Euride Gorge for his son, Dajh. However, while his attention was on the transaction, Dajh ran into the energy plant and headlong into the incident that changed him into a Sanctum l'Cie.

Though boy and chick have met only once during the brief visit Sazh was allowed by PSICOM in Bodhum, they became fast friends. Dajh is trying to decide on what he wants to call the chick, but for now, the chocobo remains nameless.

Chocolina is a time-traveling merchant who can be found all over the world. There are reports of this mysterious trader appearing in almost every age in history. Some rumors say that she is a certain creature that took on human form...

Aside from offering an assortment of wares, Chocolina is also an expert craftsperson, able to synthesize special weapons and items from raw materials. She will, however, always insist on collecting a fee.

Chocolina derives great joy from offering her services to needy time travelers, and seems to know much about Serah and Noel.

Chocolina is a mysterious traveling merchant who appears all along the timeline. She offers a variety of items to aid travelers.

With the right components and a crafter's fee, Chocolina can even create special weapons and equipment.

When browsing the shop menu for items, be sure you have the required components as well as a sufficient amount of gil! 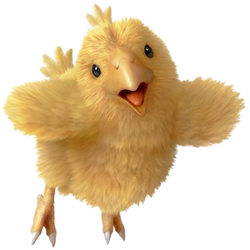 As a chocobo chick, Chocolina is tiny, small enough to fit in a palm of a hand. Given her young age, the chick has yet to acquire the elongated neck and legs the chocobos are known for at adult age, and unlike them, she is capable of flight at relatively fast speeds and lengths.

By the events of Final Fantasy XIII-2, Chocolina has been granted the ability to assume a human form by the goddess Etro. In her human form she wears thigh-high stockings with shoes shaped like chocobo feet, feathered gloves, a red bikini-like top, a red covering around her groin that includes plumage behind her, and a headdress shaped like a chocobo's head. The outfit is identical to those worn by the Chocobo Girls in Serendipity and Yusnaan.

People know me as the choco-mazing Chocolina! I'm the most chocoriffic time-traveling trader in the whole wide world!

As a chocobo, Chocolina was quite intelligent, able to understand human language and take orders from Sazh, and understanding emotions. She bonds with Vanille over the course of Final Fantasy XIII and mimics her motions. She is playful and energetic, and described by Sazh as brazen and bossy, yet he admired her toughness.

As a human, Chocolina is peppy and energetic, often posing or flapping her "wings" excitedly. She often exclaims "Choco-boco" and "Choco-boco-lina" in a singsong voice when excited, and uses various other improvised slang terms involving the word "choco." She is also a bit vain, often referring to herself as beautiful. Her energy and optimism are almost never dampened, and even when in Academia 400 AF, as she mourns events happening around her, she makes an effort to keep up spirits.

Above all, Chocolina has a good heart and truly cares for Sazh and Dajh, and the heroes as a whole. Her desire to aid them in their various adventures was strong enough to convince Etro to transform her so she could do so. 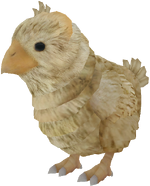 The chocobo chick remains with Sazh even after he takes part in the Purge and becomes a Pulse l'Cie. She hides in Sazh's afro and will occasionally fly alongside him. When Sazh and Vanille end up in Nautilus, they come across a chocobo farm, and the duo end up having to find the excited chick amidst the chocobo flock.

When Sazh and Vanille are captured by PSICOM and brought onboard the Palamecia, they hatch an escape plan, part of which involves the chocobo chick assaulting a soldier by surprise. The plan is successful, but Sazh owes more gratitude to the chick when she convinces him not to give up searching for Dajh.

While the party rests in the Vallis Media, the chocobo chick helps Hope gather food and supplies. When the others notice that Hope is missing, the chocobo chick flies back to the camp and implores them to follow her, communicating with Vanille something about Hope's l'Cie brand. Following the chick, the party find Hope unconscious. Later, the party finds the Font of Namva, an area in the Archylte Steppe where Pulsian chocobos live, and Sazh thinks of leaving the chick with the flock, but the chick refuses to leave him.

When the team fulfills their Focus and awake from crystal stasis, the chocobo chick flies ahead and joins the reunion between Sazh and Dajh, finally being reunited with her true owner. As Sazh approaches Lightning and Hope with Dajh on his shoulders, the chick is seen in her new home: Dajh's afro.

It is revealed in a fragment that Dajh named the chocobo chick, Chocolina, at some point. In Sazh's DLC sidestory, the human Chocolina reveals herself as the chocobo chick given human form by Etro while lost in time. Etro also gave her the ability to exist in multiple times in places to help Serah Farron and Noel Kreiss in their adventure.

While in her original form, Chocolina crossed paths with Mog as the two got into a banter over names.

When Sazh ended up in Serendipity, Chocolina had him look for the chocobo chicks wandering around the casino. After they are gathered, Chocolina reveals herself as Sazh's chocobo chick in human form, before messing with his head by pretending to dissolve as a resolved paradox.

Chocolina manages the Canvas of Prayers, prayer boards that are scattered throughout the world where Lightning can take up various quests. Her Chocobo Chick form returns alongside Sazh. During one of the Wildlands's main quests, Chocolina holds one of Dajh's soul fragments, which is obtained by completing her Canvas of Prayers quest.

Chocolina also appears in her chocobo form with Sazh and Dajh. When Lightning visits Sazh in the Wildlands, he laments on Dajh's fate of having lost his soul and seems ready to give up, which angers the little bird, causing her to fly around Sazh and repeatedly peck at him. Lightning restores Dajh to life and Sazh returns to his old self, his soul saved. It's also at this time that Lightning learns that Chocolina and the chocobo chick are one in the same when Sazh refers to the chick by name.

After Lightning has defeated Bhunivelze her allies arrive at her side, Sazh included, with Chocolina in his hair, and together they journey to the new world.

In the new world, a human Chocolina stays with Sazh and Dajh when a reporter visits Sazh for an interview. Afterward, Chocolina directs the reporter to the restaurant where the NORA work at before disappearing with only a yellow feather left behind.

There were originally plans to give the chocobo chick a role to play in combat in Final Fantasy XIII.[1]

Yoshinori Kitase has stated that Chocolina was created as a waitress in Serendipity originally, but the game's director, Motomu Toriyama, liked her design and wanted to make sure that she was featured more prominently. This led to her becoming a shop clerk, and even having her own dialogue and background history.[2] The art director of Final Fantasy XIII-2, Isamu Kamikokuryo, has said in an interview that the inclusion of the scantily clad vendor was nonchalant and harmless, but once she was integrated into the game, she was a stark contrast to the game's tone, and went on to say that if gamers were to find it surprising it was a job well done on the developers' part.[3]

In the Japanese version, she is voiced by Seiko Ueda.

Chocolina sells five categories of goods: items, weapons, accessories, monster training items, and bargains, or "Special". She is also one of the only sources for purchasing Gysahl Greens, use of which allows the player to ride chocobos. The Fragment Skill Bargain Hunter reduces Chocolina's shop prices by 25%.

In Lightning Returns: Final Fantasy XIII, Chocolina mans the Canvas of Prayers that gives quests for Lightning to complete. Chocolina presents Lightning with rewards for completing requests on the board.

The Chocobo Chick appears within Sazh's afro, and will jump out of it during the victory fanfare.

The Chocobo Chick appears as a simple sprite pixel within Sazh's afro. She will jump from it when Sazh is in his victory pose, rising with his arms.

Care to shop? I've got the goods! Choco-boco-ching!

Hither and Thither
A choco-gal with the habit of appearing in the most choco of places at the most choco of times. Has a whole bevy of different greetings for those who stop by her shop, only some of which make sense. It's all about the attitude, and not the content!

She's also an extremely special case who has managed to retain her identity as she moves from world to world. The real mystery, of course, is deciding who the real Chocolatte is: the woman, or the chocochick on her head. ...What do you mean, it never crossed your mind?

Choco-stential Crisis
Chocolatte used to go by the name Chocolina. But when she found herself in a world without Sazh and Dajh, she began to question her own identity. If the people who named her didn't exist here, then wouldn't she, by extension, be unable to know for certain whether she was, in fact, herself?

The more she considered it, the worse her existential crisis became...until the idea dawned on her to just become a new person. So voilà! New glasses, new name...totally different person, right?! Unfortunately, she has yet to fully convince the person who matters: herself.

The following is a list of quotes uttered by Chocolatte when shopping at the Chocolatte Mart.

Welcome to the Chocolatte Mart!

Come on by if you ever need anything.

Morning, noon, and brunch, I'm there with a choco-smile!

So? How's your trip going?

You can't spell "the cool cat" without Chocolatte!

The best is yet in store! Might even be in my store.

Different than usual? Don't be silly! I just decided to settle down.

Guess who's got some brand-spanking new choco-stock!

Have a fantabulous day!

The chick appears with a fire-elemental card.

Glico, the snack company has been working with Square Enix to promote Lightning Returns: Final Fantasy XIII in Japan. Friend Bakery will have Mog and Chocobo Chick on its wrapper.