A little chocobo that loves to waddle around. These feathery friends love to headbutt things; this is fine, because a chocobo's eggshell never cracks twice.

Chocobo chicks (ヒナチョコボ, Hina Chokobo?), also called chocochick, chicobo, and chickling, are recurring animals appearing throughout the Final Fantasy series, and are more notable in the recent installments. These little avian creatures are baby chocobos. They usually act like pets, assist the party in battle, or are associated with the chocobo raising minigame.

In the ending Koko lays three eggs and three chocobo chicks hatch within the Pirates' Hideout. Boko is their father.

A small white chocobo runs around with a girl in Mideel and will give the player the Contain Materia if certain conditions are met.

Though there is a chocobo breeding sidequest, the chocobos are born adult sized. The player still needs to wait for them to "grow" until they can raced.

Chocobo Chick is a summon that came as a preorder bonus. The chick deals elemental damage to enemies.

Young chocobos are known as chicobos. Depending on their age, they are about 17 cm (6.7 inch) in height on up. Chicobos are raised by a female chocobo and are protected by her in the chocobo forests. Chicobos are attracted to the ChocoZiner and will appear when called by it, but usually stay with their mother throughout infancy, following along behind if the mother goes wandering. One notable exception is Boko, although it is not known whether his mother is alive, lost, or whether he was abandoned upon hatching.

Squall and his friends can summon Boko into battle using Gysahl Greens. The player can get Gysahl Greens from the Chocoboy at the forests, or from the chicobo at the Chocobo Sanctuary after the quest is done. He has four different summon attacks: ChocoFire, ChocoFlare, ChocoMeteor, and ChocoBocle. Boko stars in his own game called Chocobo World, embarking on a quest to find MiniMog, and playing the minigame is the only way to unlock most of his abilities. Chocobo World is playable on PocketStation for the PlayStation release, and is bundled with the PC version. Chocobo World is not available for Final Fantasy VIII Remastered and Boko's attacks depend on Squall's level instead. There is also a Chicobo card for the Triple Triad minigame.

Black Mage No. 33 and Black Mage No. 111 watch over an egg. A chocobo chick hatches from it in the Black Mage Village, and they name him Bobby Corwen. The black mages decide to raise the chick.

There are a few quests involving finding lost chocobo chicks. In the chocobo raising mini-game, it takes four days for a chick to hatch from the egg, and all chicks that hatch are yellow regardless of their coloration upon adulthood. When the chick hatches, the player will be prompted to choose a name for it from the selection given. Once a chocobo chick has hatched it can be given care plan options to affect its stat growth, with more plan options becoming available as the chocobo matures. The player may also care for the chocobo personally upon stopping in to check on it, separate from the care plan laid out, by watching over it or taking it for walks. The player can feed the chocobo personally, causing stat changes based on the food given. The chocobo is considered a chick for fourteen days after its hatching.

The character Sakura is a mascot of the Chocobo Races, is available as a Trust Alter Ego, and is the subject of six children's books that are used as key items for doing Monster Rearing quests. 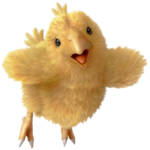 Nautilus has a chocobo farm with multiple excited chicks amid the chocobo flock. Chocobo chicks are popular attractions and are sold as pets. Sazh Katzroy bought a little chocobo with a strong will for his son Dajh, but never had a chance to give her to him before the Purge. In the interim, the chocobo chick accompanies Sazh and lives in his afro. The chick is intelligent, able to communicate with Sazh and his companion Vanille. She can also fly. On Gran Pulse, the party encounters wild chocobos whose chicks are identical to those living on Cocoon, even if their adult forms differ.

In Final Fantasy XIII-2, the chick assumes human form and goes by the name Chocolina, providing her services as a traveling merchant to Serah Farron and Noel Kreiss. In Lightning Returns: Final Fantasy XIII, she returns, this time providing her services to Lightning, but also appearing again as Dajh's chocobo chick. Lightning can find chicks of various colors in Yusnaan as part of a quest, and is apprehended by a chick in the Wildlands when she seeks to restore Dajh's soul.

The party can find chocobo chicks at Wiz Chocobo Post, where they roam around freely. The chicks are fairly large, as opposed to Final Fantasy XIII's miniature chicks. They are docile and hop around peacefully, at times fluffing their feathers. Later on, Wiz tasks the party with saving a black chocobo's egg. The party brings the egg to Wiz, who watches over it until it hatches. The player can then visit the chick at the farm. In Final Fantasy XV: Comrades the black chocobo chick, as well as other regular chocobo chicks, can be found at Meldacio Hunter HQ after finding enough refugees.

The Moogle Chocobo Carnival was a limited time event. The sidequest called "Oedka ke Chocochicks" was one of the many sidequests there, and involved finding fifteen lost chocobo chicks that had escaped across the city of Altissia. Finding them all rewarded the player with medallions. A quest similar to this was added to the main game in patch 1.23, where the player can find four lost chicks for a small reward, called Chocobaby Roundup.

Chockatrice-type enemies have chicks that resemble chocobo chicks, and they can be fought as monsters.

Chocobo chicks are called chicklings, and they are associated with the chocobo breeding minigame. A chickling hatches from the egg and grows into a chocobo. A quest in Chapter 5 in Iscah, a dominion legionary is looking for his missing chicklings and asks for Class Zero's help in rounding them up. He doesn't mean the one chickling bouncing near the adult chocobo. The cadets can first find a yellow chickling from behind a crate after going up the slope. Talking to it will have it follow the cadets, and talking to the man again gives him the chick. The black chick is found near the town entrance. The final, the white chickling, is at the very end of the town area. Doing the quest has the legionaries depart from town, and the player can freely talk to the local phantomists.

Chocochick is a minor character, appearing briefly in the main storyline. It is half the soul of Chocolina from Final Fantasy XIII-2, this time going by the name Chocolatte.

Chocochick is a Mirage from the Chocobo group. It can be transfigured to a Chocobo above level 10 or switched to a Black Chocochick board with the Black Chocochick Memento. They can be found in the Wellspring Woods and become imprismable by using physical attacks.

Black Chocochick is also a Mirage from the Chocobo group. It can be transfigured into a Hyperion with the Hyperion Memento. It can be found in the Watchplains and become imprismable by restoring its HP. 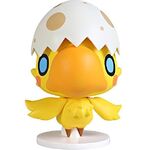 A chirping chocobo chick figure from Final Fantasy XI was made by Square Enix. The product stands 2.5" tall and requires a CR2032 mercury battery which is included. 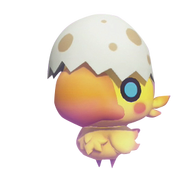