Chocobo breeding is a sidequest in Final Fantasy VII involving Chocobos. It allows the player to breed several different Chocobo breeds which can cross different terrain on the world map and access Materia Caves, as well as breed Chocobos with higher stats for use in Chocobo racing. Chocobo breeding consumes time and gil.

Chocobos can be caught across the World Map by following their tracks. Once caught after a battle when all enemies but the Chocobo are killed, they can be sent back to the stable and bred by feeding them nuts. The ultimate gain is to breed a Gold Chocobo to access every Materia Cave and gain Knights of Round, the game's best summon.

Wild Chocobos can be encountered in areas on the world map covered in chocobo tracks. Once captured, Chocobos can be kept in stables in the Chocobo Farm; the option to buy stables opens after the party has acquired the Highwind. The player must speak to the man inside the house to rent the stables. The stables cost 10,000 gil and a total of six can be rented at once. On the farm the Chocobos can be bred to create new breeds that can access different areas on the world map, or to be used in the races at Gold Saucer. The chance of encountering a Chocobo on the tracks depends on the Chocobo Lure Materia's level and the Chocobo's type.

Males and females are bred for stronger Chocobos with better stats and sometimes new abilities by feeding them nuts. Most of the nuts in the game are useless, and the lower grade nuts have a chance to produce Chocobos whose stats are lower than those of its parents. The only nuts worth using are Carob and Zeio Nuts: The Carob Nut is used to breed the first blue and green Chocobos, and Zeio Nuts are the best nuts when it comes to stats. Carob Nuts can be obtained from Vlakoradoses or from Wonder Square for 500 GP, and Zeio Nuts are obtained from Goblins.

The racing class and stats of the Chocobo being bred help decide what type of Chocobo will be born. Adult Chocobos can breed again after 3-10 battles have been fought, and newborn Chocobos can breed after 3-18 battles; for a battle to count it must be won, fleeing won't count. The higher the class, and the greater the stats, the more likely a strong Chocobo will be born. Special-colored Chocobos are needed to find the treasures in the Materia Caves. There are five colors of Chocobos and to get the ultimate Chocobo, a long sidequest of racing and item finding must be undertaken. The Chocobo Sage hints on how to get through the sidequest in his home on the Northern Continent.

While the party can begin breeding Chocobos any time after the Highwind is obtained, they won't be able to race in Gold Saucer until Cloud returns to the party. Without promoting Chocobo classes via racing, the probability of getting a colored Chocobo is only 10%. 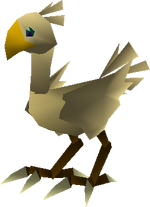 Because the game determines whether or not a Chocobo is ready to be bred by the number of battles, when the player reaches a very high number of battles this system glitches. The game can't use a key-number higher than 32767, and so uses numbers from -32768 to 32767; thus if the player fights 32768 battles, the game considers, when it does calculations for Chocobos, they have -32768 battles. 32769 battles will be transformed to -32767 battles and so on until 65535 battles will overflow the counter and reset it. When the game considers the player to be at -32768 battles, the baby Chocobo would need whopping 32766 battles to mate.

If the player comes near to the amount of battles where the game begins to consider the number as negative, they can find themselves in a situation where they can mate Chocobos over and over again without needing to fight any battles in-between. At 32767 battles the game will calculate the player will need some new battles, but it'll be always higher than 32768 battles (as that is actually -32768), meaning the player doesn't need to fight any battles to mate the Chocobos.

Below is how a newborn Chocobo's stats are determined when the parents have been mated with a Zeio Nut:[1]

If the player breeds a gold Chocobo that would normally have below 5000 maximum Dash, it will get a bonus to its MDash in the following manner:[1]

Dash refers to the sprint speed, not the regular run speed.

These values will get increased/decreased by a number between 0 and 25.

Through breeding, the player can gain access to each of the Chocobo breeds, beginning with the blue/green, and finishing with the gold.

To access the Materia Caves, which contain the Mime, Quadra Magic, and Knights of the Round Materia, the player needs to obtain Chocobos that can access each. This can be done one of two ways, either breeding Chocobos to gain access to each of the Chocobo breeds, or by defeating Ruby Weapon to be awarded a gold Chocobo from the Kalm traveler, which is easier said than done.

After purchasing some stables from the farm after the party has acquired the Highwind, the player can start catching Chocobos from battles and sending them to the farm. To breed the green and blue variants the player needs a combination of two of the following: "good", "great", and "wonderful" Chocobos; when moving the birds into the stables from the fenced area, Choco Billy will comment on their quality. The Chocobo's gender is decided when moving it in, so if the gender is undesired, one can reset the game and try again. "Great" Chocobos are caught in Mideel Area with Spirals, and "good" Chocobos are caught at the Gold Saucer Area with two Spencers or with two Flapbeats that are in the back row with the Chocobo in the front.

The player can breed two "good" Chocobos, two "great" Chocobos or a "good" and a "great" Chocobo together to get the first colored Chocobo by using a Carob Nut (obtained from Vlakorados or from Wonder Square shop). The player can race the Chocobos to greatly improve the chance of them producing colored offspring. Gold Saucer reopens after Cloud rejoins the party. Chocobos gain a rank after three wins at the races, but the rank itself is not what determines breeding success, rather, it is the number of wins. The wins are shared between every Chocobo breeding pair, so the player would only need to race one of them. To get a blue/green Chocobo the player needs four wins between the two for 100% chance.

The player can save the game before mating the birds and try again if they don't get the desired Chocobo.

After getting the first colored Chocobo the player can mate it with another Carob Nut with their parent of the opposite gender to get the other color: the result will be either yellow, green or blue. The player must win some battles first before the Chocobos become ready to mate, so one can do random encounters until the Chocobos are ready. The player can save their game before mating the birds and try again till they get the desired color and gender. Winning four races between this breeding pair again increases the chance of producing colored offspring. It should be easier to race the colored Chocobo for its higher stats compared to the yellow wild-caught ones, and the colored Chocobos get perks on the tracks in not being hindered by some of the parts on the track that usually slow down racers.

Once the player has one blue and one green Chocobo of each gender they can be mated with another Carob Nut to produce a black Chocobo. To get a black chocobo the breeding pair needs nine race wins between them for a 100% chance.

The player can now release the yellow Chocobos to make room at the stables. The player must now capture a "wonderful" Chocobo that appears at the Icicle Area tracks with Jumpings. They are tricky to catch and tend to run away as their first move. The player can use the Sneak Attack Materia to go first in battles, and linking it with an Exit Materia that has learned Remove will capture the chocobo, as the other enemies are removed.

When moving the wonderful Chocobo into the stables the player should ensure it is the opposite gender to the black Chocobo. Mating the two has a chance of birthing a gold Chocobo when a Zeio Nut (obtained from Goblins at Goblin Island) is used. The "wonderful" and black Chocobos can also be raced at the Square for better odds; to get a gold Chocobo the player needs twelve race wins between them for a 100% chance. The black Chocobo should climb the ranks easily, being bred from captive-bred Chocobos and being unhindered by the slow parts of the track.

Two "great" yellow Chocobos with a Carob Nut: At least 4 race wins between the parents will guarantee a green or blue Chocobo.

One green and one blue chocobo with a Carob Nut: At least 9 race wins between the parents will guarantee a black Chocobo.

One black and one wonderful yellow Chocobo with a Zeio Nut: At least 12 race wins between the parents will guarantee a gold Chocobo, but only if the player selects the black Chocobo first when mating with the wonderful Chocobo.

There is a way to breed a golden Chocobo without needing to race at Gold Saucer. This means the earliest the player can get the Gold Chocobo is after obtaining the Highwind, before even reuniting with Cloud.

With the right Chocobos being bred there is always a small chance the player will get the desired Chocobo, but it relies on the game's random number generator. Random number generation progresses in a predictable way, and therefore it is possible to manipulate this to get a Gold Chocobo quickly (under an hour). It relies on resetting the game to reset the random number generation, minimizing the tasks that generate new numbers (such as when traveling on the world map), and orchestrating tasks that generate new numbers in a predictable way to ensure getting the correct color and gender.

The party needs 62 Krakka Greens and 1 Saraha Nut (can be bought from the farm), 2 Carob Nuts (stolen from Vlakorados) and 1 Zeio Nut (obtained from Goblins), and to buy six stables at Chocobo Farm. After catching a "wonderful Chocobo" from Icicle Area (appears with one or two Jumpings) and a "great Chocobo" from Mideel Area (appears with one or two Spirals), the player must send them to the stables. The player should save their game next to Chocobo Farm and hard reset the game (not using soft reset).

After speeding in and speaking to Billy the player must feed 5 Krakka Greens to any Chocobo, then mate the blue and green Chocobos with a Saraha Nut (not Carob Nut) while choosing the blue one first. The result is a black female. The player should fight three random battles, save next to the farm and hard reset. If the three battles were not enough to make the black Chocobo ready to mate, the player should fight further seven battles and this should do it. As the game loads the player must run inside and talk to Billy and feed six Krakka Greens to a Chocobo, then mate the black female with the "wonderful" male with a Zeio Nut choosing the black one first to breed a gold female Chocobo.[1]