Various prizes
Chocobo Square is a section of the Gold Saucer in Final Fantasy VII. It hosts the Chocobo racing minigame, which can reward several unique Materia and boost Chocobo stats, helpful for Chocobo breeding.

The races have four ranks: C, B, A, and S, each with stronger opponents. The player will go up a rank each time they win three races in their current rank until reaching S rank. Racing is a vital part of Chocobo breeding; Chocobos that win races have better odds of producing special-colored offspring. While C rank races are the easiest to win, they are the most time-consuming to participate in, regardless of the status of the player's Chocobo, as two Chocobos must cross the finish line to end the race. Thus, even if the player finishes 30 seconds before the runner-up, they must wait for the second-in-place to finish. As the player ranks up, racing is less time-consuming, but gets more difficult.

Races at the Chocobo Square can first be competed in during "The Desert Prison". When leaving Corel Prison, Cloud must win a race on a Chocobo the race manager Ester provides him. After the party obtains the buggy, they can bet on Chocobos on the track to win GP and items. Later, when the party can rent stables at the Chocobo Farm (after acquiring the Highwind) and Cloud has returned to the party, the party can bring their own Chocobos to race. If the party rises in the ranks, they can take on Joe, the number one jockey, and his black Chocobo Teioh.

The entrance has paths to the other Gold Saucer attractions. When in Gold Saucer the first time, before heading to the Battle Square, entering here has Cloud observe Shinra soldiers. During the date sequence the chase of Cait Sith ends here.

Reached from the Entrance area, the player can buy tickets to bet on Chocobos at the booth. If they have a Chocobo of their own, they can register for a race. Ester is found on the left side of the screen, and talking to her allows the player to partake in the races directly. During the date night, Cloud also pursues Cait Sith through the ticket office.

This room is known to lag heavily on certain iOS platforms.

The Waiting Room is visited once: when Cloud must win a race to bail his party from Corel Prison. The waiting area for jockeys is accessed via an elevator from the Corel Prison, and cannot be visited again after winning the race and moving on in the story. If the player loses the race, they end up back in the Waiting Room and must try again with a new Chocobo provided by Ester. The player can meet Joe here for the first time.

The Ramuh Materia can be found on the floor. If not picked up before winning the race, the Materia is missed. After a period of time, an announcement rings, calling for jockeys to head to the track. Talking to Ester, who appears soon after, lets the player race.

There are two courses: a short one, and a long one, but they have the same prizes. Both courses take place on the same track, but for the short course a part of the track is blocked off. There are six Chocobos in a race. The player can participate by either betting for the Chocobos who place first and second, or by riding a Chocobo and going for the win.

A programming error reverses the abilities of blue and green colored Chocobos. Green Chocobos are unaffected by the space section of the short course, as well as the water section of the long course, while blue Chocobos climb hilly terrain easier. This can be seen easiest in the short course; given the same or comparable top speed, the blue Chocobo will conquer the rising spiral at the beginning far more handily than a green or yellow Chocobo. Black and gold Chocobos are unaffected by both terrains, and regular yellow Chocobos, as well as all normal AI-controlled opponents, are slowed in both parts.

Upon winning the race, the player receives an item, which they can take or exchange for GP. The items available in higher ranks include Megalixirs, rare Materia, Hero Drinks, and some equipment that can only be acquired via racing, like the Cat's Bell accessory. This is the best place to quickly earn GP—the currency used at Gold Saucer—provided the player's Chocobo is fast enough.

The player might encounter the famous Chocobo jockey, Joe, and his black Chocobo, Teioh, and race against them on the track. Teioh's stats are determined by the player's Chocobo, and are always higher, meaning Teioh can have stats exceeding those capped for the player; his speed will always be the player's speed +10%, and his stamina will always be the player's stamina +25%. Teioh never appears if the player only bets on a race. Because Teioh is a black Chocobo, it is never slowed by the courses' space/water/climb sections. As such, beating Teioh without the use of a green, black, or gold Chocobo is difficult, if not impossible. As soon as the race starts, Joe will teleport behind the player and will keep tailing the player's Chocobo until sprinting to the finish line.

If the player wins ten times in S Rank, they will receive all of the special items (symbolized by the circles on the prize menu), excepting the Magic Counter Materia, from the S class races: Sprint Shoes, Precious Watch, Cat's Bell, Chocobracelet and Counter Attack Materia.

If Tifa or Cid are in the party, there is a 50% chance they will ask to race instead of Cloud. This doesn't affect anything apart from the racer's appearance. If both are in the party, Tifa will take precedence.

In the original 1998 PC release, if the player enters the Chocobo race for the first time and plays it on Windows XP or newer, the game will crash.

The player can bet on Chocobos as soon as they can visit Gold Saucer, but the odds of winning are random; the Chocobo with the best stats will not necessarily win, and the birds' colors are purely cosmetic and operate the same as the regular yellow Chocobo.

The numbers in the grid are for which Chocobos will place first and/or second. E.g. betting on "1-2" means betting for Chocobos #1 and #2 to come in first and second in either order. The prizes are random.

The lady behind the counter in the center places a wager on a race for a 200 gil registration fee. The player can then choose the class they want to wager on. The amount of gil spent depends on the class:

In the PlayStation Classic Mini Console, the player can exploit the save state feature when predicting the bets to get the prizes they choose.

On the automatic setting, the player's Chocobo cannot be controlled. The AI will not make optimal maneuvers, but if the Chocobo has much better stats than the others, one can easily win the race with no input required.

Since Teioh always has stats higher than the player's Chocobo, one only needs to focus on having sufficient stats to outrace the normal Chocobos. If Teioh is in the race, the player should switch to manual mode and immediately accelerate to max speed by hitting the accelerate button several times. There is no indicator to tell when one hits max speed.

The player should try to stay directly in front of Teioh to block him from passing. Joe's AI does not accelerate to maximum speed often or dash until the final stretch. After the space stretch on the short course, the player can dash all the way to the finishing line. A gold or black Chocobo should have sufficient stamina to run at full speed to the finishing line in the short course.

The Chocobo will run the race on its own even in manual control. The most the player can do is steer and adjust the speed. Chocobos with poor intelligence will be difficult to steer.

In the PlayStation version, items with a GP value of 200 or more are always rare items. This differs from the PC version, which has a different set of rare items and item appearances by class. The GP value for each individual item is the same in both versions, however.

In the PlayStation 4 version, winning the race the first time earns the Chocochampion trophy.

Aside from the player's Chocobo and Teioh, the other Chocobos have randomly generated colors, stats, names. The English version replaced this system with a single random list of potential names. It appears that some of the intended names have been split over two Chocobos in the final list: "K" and "arl", "Ju" and "ly", and "Rober" and "t". In the original Japanese version of the game, other Chocobo names were randomly generated by connecting a list of prefixes and suffixes. Teioh was called Dongfang Bubai (トウホウフハイ, Tōhō Fuhai?), while "Teioh" was originally one of the Chocobo name suffixes.

Serendipity, the casino that exists outside of time, alludes to the Gold Saucer from Final Fantasy VII. It has a chocobo racing minigame the player can partake in after catching some chocobos from the wild. The player doesn't ride the chocobos, however, it is a betting minigame.

The Manderville Gold Saucer is an allusion to the Gold Saucer in Final Fantasy VII. A similar version of the chocobo racing minigame exists there, with its own theme.

There are some version differences between the Japanese and overseas versions of the minigame. The rival Chocobo names are randomly generated by connecting a list of prefixes and suffixes in the Japanese versions, whereas the localizations use a single random list of potential names. The rival Chocobos in the original Japanese version have considerably higher stats, even resulting in unwinnable races. This persists in the Japanese International version. This is one of the few and most major differences between the Japanese International and NA/PAL versions. 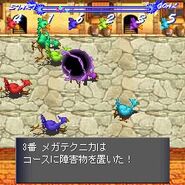