Can't remember for the life of me...

The Chocobo Sage is a character in Final Fantasy VII. He lives in an isolated chalet in the mountains of the Icicle Area only reachable by Highwind or a green, black, or gold chocobo. The cabin is not marked on the world map.

Chocobo Sage keeps a green chocobo in a stable in his cabin, which gives out the Enemy Skill Materia. He sells a nuts and greens, among them the rarest and most valuable ones aside from Carob and Zeio Nuts. Chole from the Chocobo Farm admires him, reacting impressed if the party talks to her after meeting the Chocobo Sage.

The Chocobo Sage has bulbous body covered by a purple robe with a purple "tail" and no visible legs or feet. He wears a green straw hat that obscures his face with only bright yellow eyes and a long white beard showing. He carries a large stick, and his body hovers, similar to Bugenhagen. His appearance is similar to the spiritual manifestation of the Cetra in the Temple of the Ancients.

The Chocobo Sage is mysterious, with a vast knowledge of the world regarding chocobos, but his memory often fails him, to the point where he even forgets who he is or what he is saying. Once he remembers something, he happily informs the party.

Chocobo Sage advises how to breed special chocobos. He only tells one bit of advice at a time, relaying the information once before forgetting it, although Chole at the Chocobo Farm keeps track of the accumulated info. After Chocobo Sage has given all the advice, the party will have learned how to breed the green, blue, black and gold chocobos.

Chocobo Sage gives the player one piece of advice at a time, and to get the next piece the player must go and fight between 3 to 6 battles before returning. Once he gives all the possible information regarding the breeding of the gold chocobo (which he calls the "Ocean Chocobo"), he will say "I think... that's all I'm gonna remember". After that Chole will instruct the steps to breed all the special chocobos.

"I remember now! That's the one they call..."
"It's a Mountain Chocobo. And just like the name says, he can cross any mountain."
"There was another one that could cross rivers, too. They called him 'River Chocobo'."

"There aren't any around now."

"Oh right!"
"It was about the Mountain Chocobo and the River Chocobo I told you about."
"When you mate these two together..."
"...you get one that can cross rivers AND mountains."
"And... And also...uh, what was I saying?"
"Can't remember for the life of me..."

"Right, right! I remember! You take the Mountain-and-River-crossing Chocobo..."
"Mate it with a 'Wonderful Chococo' you can catch right around here... And you'll get..."
"Can't remember for the life of me..."

"Oh yeah! Zeio nuts were..."
"The favorite of goblins. There's a small island east of here where the goblins have a bunch of them."

The game suffers from a two-fold glitch because it stores the number of fought battles as a signed 16-bit value. This means the number could be between -32768 to 32767. Though it is never supposed to be negative, if a player who has fought 32767 battles fights one more, the number is saved as -32678 because of integer overflow.

If the player's battle count comes between 32764–32767, Chocobo Sage gives more advice without the need to fight battles. The reason is that upon receiving the last piece of advice, the game sets the needed battle count to what turns out a negative number (caused by overflow). Upon talking to Chocobo Sage again, the game believes that the player has fought 65533 or more battles since that last conversation, which is more than the needed 4. Thus the game exposes the next piece of advice.

The Sage runs a store that sells chocobo merchandise.

In an early design draft, the Chocobo Sage was named as the "Materia Fogey".[1]

The Chocobo Sage's house on the World Map. 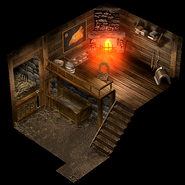 The Chocobo Sage's house inside.

[view · edit · purge]A sage in classical philosophy is someone who has attained the wisdom which a philosopher seeks. In Eastern mythos, this usually comes with a number of supernatural benefits/abilities depending on the mythos. One staple attributed to a sennin (仙人?, lit. hermit) is them being "Immortal Mountain Sages" (which might be why the Chocobo Sage is found isolated in a ravine surrounded by mountains).