Final Fantasy Wiki
Register
Don't have an account?
Sign In
Advertisement
in: Chocobo Racing, Games in the Chocobo series
English

Floor it or get out of the way!

Chocobo Racing is a video game for the PlayStation, released in 1999 by Square Electronic Arts. It is a kart racing game, and it has often been compared to Mario Kart and Crash Team Racing. Though most characters use cars or buggies, some specific ones just fly, or use scooters, magic carpets, roller skates, a mine car, and even a cloud.

The game's characters consist mainly of popular recurring figures from Square's Final Fantasy series, such as Chocobo, the Moogle and the Black Mage. In true Final Fantasy style, a character named Cid appears.

There are five modes of race:

The standard goal is to reach the finish line first. However, this is not easy with Magic Stones scattered throughout the tracks. Each racer can hold a maximum of three magic stones. If a racer collects several magic stones of the same type, those stones will "level up".

Magic Stones can be stolen by bumping on another racer from behind.

The inventor Cid presents Chocobo with a pair of "Jet-Blades" and offers Chocobo a chance to take a test-run with them on the racetrack behind his lab. After the race, Mog drops in and asks Cid about the progress of the racing machine he had commissioned. Cid promises to bring the machine by tomorrow, but later confides to Chocobo he had forgotten it.

The next day, after presenting the doubtful Mog with his scooter, Chocobo and Mog race. After Chocobo wins, Mog confronts Cid over his vehicle's poor performance, but Cid replies that Chocobo won because of the differences in their abilities; Chocobo's "Dash" and Mog's "Flap". He explains that the secret of Chocobo's "Dash" ability is the Blue Crystal on his leg-ring. Mog mulls over his inferior "Flap" ability and decides he wants a Blue Crystal as well, so Cid recommends that the two go on an adventure to find out the secret of the Blue Crystal.

Chapter 3
A Life in Ruins!

The two head out to discover the secret behind the Blue Crystal. At the village gate, they met the gatekeeper Golem who warn them of the dangers beyond the gate and prohibits them from leaving unless they beat him. Mog and Chocobo notices a Blue Crystal on Golem's bracelet, and Mog proposed a race where the winner gets all Blue Crystals. When Chocobo wins the race, Golem decides to follow them, since he did not trust Mog.

Chapter 4
The Pleasure is Mine!

The trio continues on towards the Mythril Mountains, where they need to go through an abandoned mine to cross to the other side. Just then, a Goblin bandit appears, taking Mog hostage and demanding them money. Chocobo and Golem notices a Blue Crystal on Goblin's right earring. Goblin forces them to race him, and the winner gets to keep all Blue Crystals. After beating Goblin, the trio realized that the Goblin is the infamous Gobin Hood, a thief who steals from the bad and rich and gives to the good and poor. With his identity revealed, Gobin Hood demands that he follows the group and Chocobo agrees.

Goblin guides them through the Cursed Forest, where they stumble upon the infamous Black Manor. Chocobo bravely enters the manor first and discover a racetrack. After the race was won, the Black Manor's owner Black Magician reveals himself to the party. It was his magic that kept everyone from leaving the place. Somehow, Chocobo and Black Magician became fast friends and so tags along with the party silently. Mog wishes a cute girl would follow them instead...

Black Magician silently leads them to Mysidia, a village of mages. Tired from their travel, the party asks a White Mage to heal them. She notices that they all carry shards of Magicite, which they refer to as the Blue Crystals. The travelers were interested to know about the legend of the Magicite; but White Mage refuses to tell them unless they beat her in a race. When the race was won, White Mage tells the legend:

There are Magicite Shards scattered all over the world. It used to be one large Magicite Crystal... But people kept fighting each other over it. So the founder of Mysidia, the great magician Ming-Wu, broke the Crystal into eight pieces. He then scattered the shards to the four winds. He did so to assure later restoration of the Magicite Crystal...when all eight pieces are brought together again.

White Mage then felt responsible for revealing the legend, and so decides to follow them. The party agrees, except for Mog, who mumbles about "democracy"...

Chapter 7
Maybe it's something I ate...?

The party reaches Gingerbread Land, where they met Chubby Chocobo and discovered that he had ate a piece of the Magicite. Eager to get his hands on the shard, Mog proposes a race where if they win, they get the Magicite in Chubby Chocobo's stomach, and if they lose, Chubby Chocobo can eat them all. The race was won, but Chubby Chocobo confesses it is hard to get the shard out the natural way due to his bowel problems, and decides it is better to follow the party instead.

Chubby Chocobo leads them to Vulcan-O Valley, a wasteland said to contain a Magicite shard. Behemoth, a magical monster, appears in front of them. When White Mage reveals their intention to search for Magicite shards, Behemoth reveals to them his own piece, the largest one. Behemoth then challenges them to a race, where the winner receives all the shards. When the race was won, Behemoth stands defeated and hands them his piece. Suddenly, the Magicite pieces begin to glow...

Mog's "head bopper" was in fact a shard of Magicite. With all eight Magicite shards brought together, the portal to Fantasia was revealed when Black Magician officially talks. During this, the opening to the fourth part of Dancing Mad plays. The party arrived at Fantasia, the realm of the Espers, where Bahamut, the great king of Espers, places them in a final trial: master Ultima, the magic stones of Fantasia, and defeat him. After the race was over, Bahamut reveals more details of the legend:

Mankind has fought over the Magicite for aeons, only so that they could open the portal to Fantasia, and exploit the magical power of the Espers for their own selfish purposes. Fearful for the future of humans, the great magician Ming-Wu and I chose to break the Magicite Crystal into pieces and scatter them throughout your world. So that the possessors of the eight crystal shards would not gather together and open the portal to take hold of Fantasia, we gave the eighth Crystal to Behemoth to guard over. It was also at this time that the "Ultima" stones were brought here and sealed in this realm. This was done so that humans could no longer threaten other things with the power of Ultima.

However, relieved that the party, a gathering of different races: chocobos, moogles, golems, goblins and humans, have traveled together in harmony, Bahamut decides to open the portal between the Outer World and Fantasia, declaring that "Fantasia shall exist in harmony with your world from this day on".

Below is a list of the storyline racers, their vehicle and their unique ability.

Aside from Squall, secret characters do not have custom portraits (they appear merely as a generic black figure with a question mark for a face) or their own abilities (they must select another racer's).

Chocobo Racing Original Soundtrack is the soundtrack produced by Kenji Ito for the game. It uses music from the Final Fantasy series. 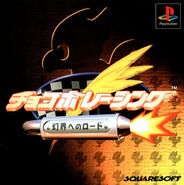 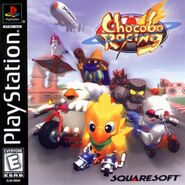 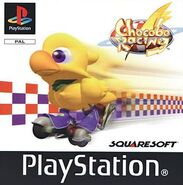