Chocobo Races is a minigame in Final Fantasy XV where the player can race their chocobo on the Chocobo Race Track south of Wiz Chocobo Post. Chocobo racing is the national sport of Lucis. New tracks become available as the player completes the current challenge, and all challenges can be undertaken in Chapter 8. The player wins medals to decorate their chocobo with, and can find various fruits along the track that can be used to dye chocobos' plumage. Chocobo racing is a recurring activity in the Final Fantasy series, popularized in Final Fantasy VII. 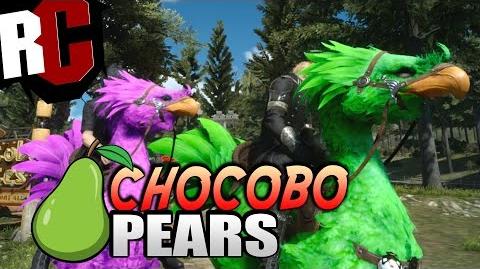 The player can race after the mark Deadeye has been felled and chocobo riding has been enabled. Talking to the man at the booth at the track lets the player race. The controls are the same as when riding a chocobo on the field, and the chocobo's stats are the same. The player can improve their chocobo by leveling it up and by feeding it special greens at camp.

Straying off course leads to being disqualified. The course is marked by the blue quest markers while the player is riding. Placing first wins medals the player can use to adorn their chocobo and unlocks the next challenge—each race track is different. Fruit can be found along the track, sometimes depending on weather, which can be used to unlock new chocobo colors at the Chocobo Salon at the Wiz Chocobo Post.

Chocojockey and Chocoracer are abilities unlocked in the Ascension that allow the player to gain 1 AP/50 EXP from winning a race. They cost 32/99 AP to unlock and are not generally considered worth the AP cost.