Only a select few can become Chocobo Knights. You have to be a skilled rider or achieve some combat merit to become one.

The Chocobo Knights are a recurring group of mounted knights in Final Fantasy. Frequently depicted as a specialized unit, they use trained chocobos as mounts to ride into battle.

The Chocobo Knights of Spira are an elite group of mounted soldiers, consisting of the serious but kind Captain Lucil, cheerful Elma, and the uncomfortable and slightly incompetent Clasko. It is mentioned by an NPC that normally one must be a skilled chocobo rider or achieve combat merit to become a chocobo knight, and that Clasko was likely knighted because he is good at earning chocobos' trust. It is never stated directly that the knights are part of the Crusaders, but they do take part in Operation Mi'ihen and both Lucil and Elma are shown giving orders to Luzzu and Gatta.

The knights encounter Yuna and her guardians at various moments along Yuna's pilgrimage in Final Fantasy X and fight, bravely enough, in Operation Mi'ihen. After the battle the Chocobo Knights' numbers are severely damaged as Lucil, Elma and Clasko travel past the Moonflow to acquire new chocobos to replace those they lost.

Two years later, the trio have joined the Youth League and Lucil and Elma have risen to the positions of command, while Clasko is still low in the ranks and spends much of his time being ordered around. Later on, depending on the player's actions, Clasko may set up a Chocobo Ranch in the Calm Lands.

During a trip to Mushroom Rock Road towards the end of the game, depending on the player's actions, the party may participate in a fighting tournament, with the last two opponents being Elma and Lucil. Elma attacks with a sword, and Lucil uses elemental gems. Depending on the player's actions late in the game, Elma may indicate that she is considering reorganizing the mounted Chocobo Knights.

Bred in San d'Oria, the Chocobo Knight mounts underwent training that allowed them to bear the weight of heavy armor and withstand the shock of cavalry charges. Known as Destriers the chocobo were characterized by their large, jet-black bodies and thick, powerful legs. With the decline of lance combat and improvements to ranged weaponry, Destriers lost their place in battle to the faster breeds; such as Coursers. The Chocobo Knights would be gradually faded out of the battlefield. 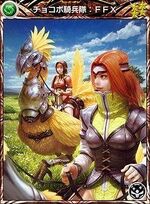