Final Fantasy Wiki
Register
Don't have an account?
Sign In
Advertisement
in: Jobs in Final Fantasy Tactics A2: Grimoire of the Rift

Chocobo knights harness the innate abilities of their feathered mounts.

Chocobo Knight is a job in Final Fantasy Tactics A2: Grimoire of the Rift, exclusive to moogles.

Neither Hurdy nor Montblanc can become a Chocobo Knight due to their unique sprites. According to Gurdy's section in Hurdy's side story, Montblanc couldn't ride on a chocobo. Hurdy says he could ride a chocobo, but has a policy against it.

Able to tame chocobos, these knights can capture them during battle, ride them and use the chocobo's abilities, such as Choco Meteor, until it dies. Even if re-raised or petrified, the player will lose the mounted chocobo, but Equip Ribbon from the Tinker job is a good way to counter the petrification.

Although Chocobo Knights have no innate abilities and limited stat growth, their speed growth is unmatched and they can wield any type of non-ranged weapon. This means that they can wield spears, which allows them to attack up to two tiles away. Unfortunately, when riding a chocobo, the knight uses only its base physical power for attacks (with few exceptions). They can ride different colored chocobos with each color giving the knight different abilities (though some are shared among all colors). Although they can use the chocobo's abilities when mounted, Chocobo Knights cannot use any secondary A-abilities (e.g. Onslaught, Thievery and so on) while doing so. Keep in mind that Chocobo Knights do not master the abilities of chocobos; they are only usable as long as the Knight is riding a chocobo.

Overall, the Chocobo Knight is a very unique support class, even with its flaws. Chocobo Knights can wield nearly every kind of weapon, and the Chocobos provide very practical abilities. Of course, they cannot all be used at any given time, but Choco Cure and Choco Barrier are available to all variants. The Red and Black Chocobos have abilities useful for offense, while the Green, Brown, and White chocobos have abilities useful for defense and support.

Aside from their Speed, Chocobo Knights have unremarkable stat growths, thus it is highly recommended to level up in other classes such as Moogle Knight instead before switching to the job. In addition, the intricacies regarding chocobo mounting are far from convenient. Chocobo Knights lose their mount anytime they are KOd, change their job class, or purposefully dismount their ride. Losing mounts can hinder strategies, lower combat performance, and overall provide an inconvenience.

When a Chocobo Knight mounts a chocobo, the name of the job will change according to the chocobo's color; e.g. mounting a black chocobo changes a Chocobo Knight's job to Black Rider. To capture a chocobo, the chocobo's HP must fall below Critical status. It can then be mounted by any Chocobo Knights in a 1 square range (a special command will appear). A chocobo cannot be mounted if it is afflicted with debuffs (such as Berserk), but they can be mounted through buffs, such as Protect or Shell. With the additional height from their mounts, Chocobo Riders can enter water without the aid of Winged Shoes, but a chocobo cannot be mounted while it is standing in water.

*The Black Rider is a flying unit, so its Jump stat is irrelevant.

If the rider is wearing armor that gives protection to Water, Lightning or Holy, the weakness to the element will be overwritten by the specific strength of resistance of the armor (Half Damage/Immune/Absorb).

The CHOCOBO KNIGHT has the powers of his mount at his command.

The Chocobo Knight appears as part of the Crystal Defenders collaboration. 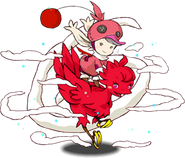 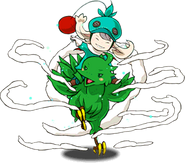 Final Fantasy Tactics A2: Grimoire of the Rift jobs and abilities
Community content is available under CC-BY-SA unless otherwise noted.