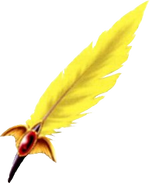 A feather the size of a butcher's knife. These are sturdier than they might appear, and suitable for use in armor, though they smell a mite foul.

The Chocobo Feather (チョコボの尾 or チョコボの羽根, Chokobo no O?) is a recurring, single-use item that is frequently used to cast Haste on a character. It has also appeared as an accessory and key item.

The Choco Feather is an accessory that increases Dexterity by +10. It can be won by winning all eight battles on the Battle Square in a special battle commissioned by Dio when looking for the Keystone at Gold Saucer, or bought in Wutai Village.

This section about equipment in Dirge of Cerberus Lost Episode -Final Fantasy VII- is empty or needs to be expanded. You can help the Final Fantasy Wiki by expanding it.

Casts Haste on one character.

Chocobo Feathers not only appear as items, but can be found in the field to denote a spot where the player can jump to another location while riding a chocobo. Six can be used to customize Initiative to a weapon.

Chocobo Feathers are sold at Chocobo Stables, and can be used for low-level arrow fletchings and other Clothcrafted goods. Much rarer are the Black Chocobo Feathers, used in high level Clothcrafting.

Chocobo Feathers are an item obtained from Botany in the South Shroud, and are used in a variety of Synthesis recipes.

The Chocobo Feather is an accessory that doubles the EXP earned, but has a 30% chance to break after battle. It is won after fighting enough battles on certain Play Plans.

Bartz carries a chocobo feather with him as a good luck charm, and gives it to Squall to help him when he decides to travel alone. Squall carries the feather as a reminder of Bartz and Zidane, and at the end of Bartz's story returns the feather to him before he fights Exdeath. After Bartz is victorious, the Chocobo Feather transforms into Bartz's crystal.

The Chocobo Feather is a mid-ranked leveling item. When applied, it grants a fair amount of EXP to one unit. The player can earn up to three Chocobo Feathers per day by completing daily missions, with additional Feathers awarded when under a campaign.

The Chocobo Feather is used during Field Music Sequences (FMS). It activates in the Feature Zone, and ensures the player will be successful in calling a Chocobo. It is obtained randomly after completing a Music Stage.

Chocobo Feather is an item that can only be used in Field Music Sequences. It ensures a chocobo will appear during Feature Zone. It can be obtained randomly after completing a Music Stage.

Chocofeather from Final Fantasy VII appears as a Rarity 2 accessory.

The Brain Blast quiz it is revealed that a Chocobo Feather accessory is considered to grant wishes, but is seldom used because of its smell.

When a Chocobo unit has been KO'd on the battlefield, it's KO sprite will be that of a chocobo feather.

The Animist unit is holding an item similar to the Chocobo Feather at the Chocobo Rush ability.

Yu Hayakawa and Choco Billy from Final Fantasy VII both wear Choco Feathers around their ears. Yu uses the feather to communicate with his chocobo, Chobi. 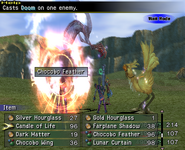