Zack Fair visited the Chocobo Farm for a number of missions.

Cloud Strife and the party visited the Chocobo Farm during "Going After Sephiroth". In need of a way to reach the Mythril Mine, the group turned to the farm to ride a chocobo to get past the dangerous Midgar Zolom. After buying a Chocobo Lure Materia from Choco Billy, they caught one to cross the marsh more easily.

Cloud and the party later returned to catch and breed chocobos. This allowed them to breed more powerful chocobos and reach some impassable parts of the world, and to compete in chocobo races in the Chocobo Square.

A crew member on the Shera kept a river chocobo at the farm, having named it "Boco".

The Chocobo Farm is located in the northeast area of the eastern continent. It is situated in the middle of grassland with an abundance of chocobos roaming the land nearby. The farm itself is relatively small, with a single ranch, an outside pen, and a house for the owner.

The Chocobo Farm can be visited on the world map after leaving Midgar, but does not become important until the chapter "Going After Sephiroth". Here, the player must visit the Chocobo Farm to purchase the Chocobo Lure Materia from Choco Billy for 2,000 gil and catch a wild Chocobo, in order to evade the Midgar Zolom and reach Mythril Mine. Though it is possible to defeat Midgar Zolom instead, doing so is extremely unlikely at this point in the game.

Racing Chocobos are later bred here after the events of "That Which Waits in the Northernmost Reaches" when Meteor is summoned, with Choco Billy looking after them in the stables. Breeding allows the player to have access to better Chocobos that can reach impassable parts of the map and reach the Materia Caves around the map. The Summon Materia Choco/Mog can also be obtained here. Finally, Chole, Choco Billy's sister, assists Cloud by keeping notes of what the Chocobo Sage divulges.

The Chocobo Farm appears as a location in several missions. It serves no storyline purpose. 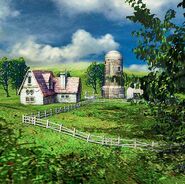 Pre-release image of the farm with a different farmhouse and a tree to the right.

Farm as it appears in Crisis Core -Final Fantasy VII-.