Chocobos are large birds used as steeds in Final Fantasy Type-0. Chocobo is a recurring creature in the Final Fantasy series, appearing in almost every installment. In the world of Orience chocobos are clad in armor and ridden into battle.

Izana Kunagiri's chocobo, Chichiri, accompanies him to battle when Milites attacks Akademeia. Though wounded, Chichiri protects her rider valiantly. Izana rides Chichiri through burning rubble, but is too weak and falls to the ground. Chichiri refuses to leave his side, and both perish.

When Machina Kunagiri visits the Akademeia chocobo stables, he thinks Chichiri would be a good name for a chocobo, not realizing he had already named a chocobo such once, as all memories of his late brother were removed from him by the Vermilion Bird Crystal. Ace is another Agito Cadet at the academy who loves chocobos and thus frequents the stables.

Orience's chocobos are moderately taller than humans. They are found all across Orience and are a common means of transport. Chocobos bred in captivity become affectionate of humans, and bond with their riders to the point they refuse to leave their side even in danger. Because of chocobos' loyal and brave nature, they can be used as war steeds. For example, Akademeia breeds chocobos and provides them to deployed cadets as a means of transportation.

Chichiri is a chocobo who accompanies Izana. She was named by Machina, who presumably owned her originally. Despite being injured she protects Izana till the end. She dies to attacks from the Militesi Empire and goes down with her rider.

When the player first visits the Akademeia Chocobo Ranch they get 20 chocobos, ten males and ten females. They can "test ride" a chocobo in the corral. Chocobos appear under the "Item" section of the menu, and can be ridden on the world map as long as the party has at least one in the "inventory". When a chocobo is available, a chocobo icon and the button input required to mount it appear on the side of the screen. Chocobos have their own physical attack while mounted, Chocobo Kick. If the player is attacked while riding, such as during the RTS sequences, the chocobo takes damage and can die. 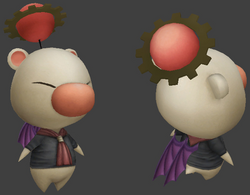 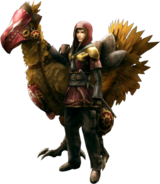 Riding a chocobo on the world map.