Chocobo (チョコボ, Chokobo?) is a race of bird in Final Fantasy Tactics. They are a major mode of transportation and are some of the most commonly recognized species in Ivalice. Player units can mount and ride chocobos by moving onto the square inhabited by an ally chocobo during a battle and are also immune to certain status effects while mounted. This prevents the chocobo from taking action but provides the human unit with high movement and jump abilities.

Much like other monsters, Chocobos can be recruited if the party has an Orator with the Entice ability, or any job with the Speechcraft command and the Beast Tongue support ability. Players can also recruit an unique yellow Chocobo, Boco, on Chapter 2. Such as other recruitable creatures, Chocobos lay eggs (as long there are enough slots avaliable on the party), which can spawn three variations: yellow, black and red.

A hazardous bug triggers by having a human character perform the Jump attack while riding a chocobo from where the water depth is 2-level (such water depth prevents combatant from performing any action without the movement abilities Swim or Waterwalking). After the one jumping has landed on the target and returned to the chocobo, the game will soft-freeze. This bug can be avoided by equipping the aforementioned movement abilities on the rider.

A large bird with vestigial wings that are incapable of flight. Its fast running speed makes it an ideal mount.

Normal yellow chocobos are among the first enemies encountered in the game and their movement range and speed can be dangerous to an inexperienced player. They have the most balanced stats of all chocobos, and can use Choco Cure, which works similarly to the Monk's Chakra ability (but recovers only HP and can be used to heal others on a different height).

If next to an ally with the Beastmaster support ability, yellow chocobos gain access to Choco Esuna, which combined with Choco Cure makes them a very support-oriented unit to use in battle.

Enemy yellow chocobos are among the best foes to exploit for level and JP grinding, as the player can surround the chocobo with their units, damage it enough so it uses Choco Cure, and repeat.

A large bird whose fast running speed makes it an ideal mount. The only variety of chocobo capable of flight.

Black chocobos can fly. They are considered the "Berserkers" of their kind, possessing the highest physical and magic attack, accompanied by the lowest HP and speed of any other chocobos in the game, which is compensated by their high physical evasion. Their ranged move, Choco Pellets, makes them more dangerous than their yellow counterparts.

If next to an ally with the Beastmaster Support Ability, the black chocobos gain access to Choco Meteor, making them as deadly as their red counterparts. Thanks to their flying ability, this variant of chocobo makes the most ideal mount.

A large bird with vestigial wings that are incapable of flight. Considered the finest variety of riding chocobo.

Red chocobos have the highest HP and speed of the three chocobo breeds as well as high magick attack. They are fearsome birds to fight in numbers due to their powerful Choco Meteor attack, which deals massive damage from long range; the meteorite is shaped like a chocobo's head. They also have Ignore Elevation as a passive ability, allowing them to easily reach their enemies regardless of terrain.

If next to an ally with the Beastmaster Support Ability, the red chocobos gain access to Choco Cure. They are the best ones to be used in battle, considering their high speed, stout stats and ability to ignore terrain height.

The damage formula for Choco Beak is as follows:

The damage formula for Choco Pellets is as follows:

The formula for Choco Cure and Choco Meteor are as follows:

The formula for the success Choco Esuna is as follows:

A better view of the meteorite of Choco Meteor.

Delita riding a Chocobo in an FMV. 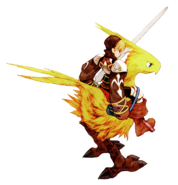 A Squire riding a chocobo.