Throughout Eos, many kept at Wiz Chocobo Post in Duscae

Ah, sweet chocobos. You always set my soul at ease.

A chocobo is a type of large, flightless bird that appears in Final Fantasy XV. It is a recurring Final Fantasy series mascot. Tame chocobos can be rented to help traverse the world of Eos, but wild chocobos also exist.

Before the advent of automobiles, chocobos served as steeds, transporting people and goods from place to place. Out of all the various breeds, black chocobos have proven the fleetest of foot, keeping apace with most conventional vehicles. As an endangered species, however, dark-plumed chocobos are rarely seen in the wild.

Chocobos are tall, friendly avians that roam wild but can be tamed and ridden. Wild chocobos once trotted freely through the forests of Duscae, but the recent influx of ferocious beasts has sent the birds running in fear and the population dwindled.

Wiz Forlane dedicates his life to protecting the birds, and several are kept at Wiz Chocobo Post in Duscae. The birds become loyal companions and steeds, capable of jumping high, gliding short distances, and swimming in calm waters. Chocobos feed on greens, gysahl greens being their favorite. While wild chocobos can be found with yellow or black feathers, tame chocobos' plumage is frequently dyed various colors. Chocobo chicks are fairly large and docile with fluffy bodies.

The Fat Chocobo mount from Final Fantasy XIV also appears as Y'jhimei's steed in the Adventurer from Another World collaboration quest, whom Prompto names "Mr. Chunkobo."

For a fee of 50 gil per day, Noctis and friends can rent chocobos for up to a week at various outposts. The birds can be called at any time by a whistle in most overworld areas, and they follow the party when they are not being ridden. Trying to ride them into an area they aren’t suited will make them stop in their tracks. If the rental period expires, the chocobos won't return until Noctis dismounts.

Chocobos enable Noctis and his friends to travel at high speeds. They are not as fast as the Regalia, but can go off-road, and can either walk or trot. While chocobos are flightless, they can jump high, glide short distances by holding the jump button, sprint for a limited time, come to a screeching halt. Sliding helps make sharp turns and it also restores stamina, making alternating between sliding and dashing the fastest mode of movement.

Chocobos can swim in calm waters (they cannot enter the ocean or the rivers). Taking a chocobo to the Vesperpool in northern Cleigne lets the player access fishing spots that cannot be reached on foot. Riding on a chocobo the first time earns the Chocobo Jockey achievement/trophy.

Enemies can attack the riding party and Noctis will be forced off his bird if it is struck. Chocobos may flee from battle, but gain the ability to attack and buff the party as their levels increase. A chocobo's level, in combination with what it is fed, determines its stamina for sprinting, jump height, and gliding ability. Max level chocobos can perform a blindside link with Noctis randomly when the bird is nearby when blindsiding an enemy with a sword, polearm, greatsword, daggers or a royal arm. Unlike other blindside links, the game doesn't display the "Blindside Link" text when it occurs. The chocobo attacks Noctis's target, and then Noctis jumps on the saddle and delivers another blow with his weapon, then jumps off the chocobo that runs away. Occasionally, when initiating a blindside link with a chocobo, it will not physically manifest, and Noctis will simply hover in mid-air throughout the animation.

Chocobos join Noctis and his friends at camp, where they receive stat boosts if fed special greens. Greens can be purchased at Wiz Chocobo Post or obtained directly from Wiz by completing the quests he offers.

Rent-a-birds are located at various outposts and on the Vesperpool parking spot, as this area has no outposts.

Chocobos level up after they are ridden for extended periods of time. This occasionally grants them new abilities. Chocobo levels, rental ability and customization carry over when using chapter select.

Like with the party, chocobos can be fed at camp. These statuses are likewise displayed in blue.

The player can unlock abilities on the Ascension that enhance chocobo-related activities.

Noctis can race chocobos against his allies and try his hand at hoops races at a track near Wiz Chocobo Post. Winning races earns medals the player can decorate their chocobo with. The player can also find pears along the tracks that can be used to dye the party's chocobos to various colors.

Chocobo Salon at Wiz Chocobo Post can be used to customize the player's rented chocobos (Iris's chocobo cannot be customized). The player can dye their plumage and decorate them with medals gained from winning races. Noctis’s chocobo can be given a name.

Wiz gives out chocobo-related quests at the Wiz Chocobo Post. Camping at the Myrlwood with a full party triggers a tour with Ignis that features a wild black chocobo.

The Moogle Chocobo Carnival was a limited time event. The sidequest called "Oedka ke Chocochicks" was one of the many sidequests there, and involved finding fifteen lost chocobo chicks that had escaped across the city of Altissia. Finding them all rewarded the player with medallions. A quest similar to this was added to the main game in patch 1.23, where the player can find four lost chicks for a small reward, called Chocobaby Roundup.

I can't get it out of my head!

"Blues de Chocobo" plays at Wiz Chocobo Post, and "Rodeo de Chocobo" plays while riding. Both were composed by Yoko Shimomura. During E3 2016 Square Enix showed a trailer with music by Afrojack that contained a bit of the chocobo theme. This can be played on the game's music player. Prompto sometimes sings the chocobo theme after the player learns about the Wiz Chocobo Post. An arrangement of the "Victory Fanfare" plays when winning a chocobo race.

"Rodeo de Chocobo" that plays when the player rides a chocobo originally could not be overridden with the in-game MP3 player, but this was addressed in patch 1.05.

The riding music is different when walking/swimming and trotting, and the music transitions to the trotting music smoothly. The transition time for walk-to-run is set longer than run-to-walk so that the music would not change every time the player must slow down to avoid a tree or to turn.[1]

A chocobo sticker can be found on a jeep outside of Layla Hassan's base during the present day scenarios.

A chocobo-styled camel named Kweh is a reward Bayek can earn upon completing the quest "A Gift from the Gods," part of Ubisoft's Assassin's Creed: Origins collaboration event with Final Fantasy XV.

A downloadable skin of the Chocobo Mascot from Moogle Chocobo Carnival is available.

Chocobos appear on the stage Hammerhead as spectators.

Square Enix considered allowing players to catch and tame chocobos during the development of Final Fantasy XV.[2] The company wanted the birds to have a lovable presence but look realistic, thus it had artists hide their leg joints with plumage and also disguise the patches of skin that appear under their eyes. Great care was taken to ensure the chocobos that appear in Final Fantasy XV were "cute."[3]

When the party dismounts their chocobos sometimes they pet their birds afterward. Prompto sometimes tries to pet his ride, but it shakes him off.

The Regalia's hubcaps have a chocobo talon motif. The Regalia itself can also be customized with a special, chocobo-related skin.

In December, 2015, Square Enix's official Final Fantasy XV-related social media accounts asked fans to decide whether a chocobo that was to appear in a special piece of holiday artwork should be yellow or black. Yellow was victorious.

It is possible to visit Angelgard via an "out of bounds" glitch if the player swims there on a chocobo.

The Caricaturist likes to draw chocobos; there is a drawing at Wiz Chocobo Post, and two at her spot in Altissia. The "poppeck" style of fishing lures look like chocobos.

The first bonus, Dash de Chocobo, takes its name from the opening theme from the 1998 PlayStation 1 game Chocobo Racing.

The Regalia's hubcaps have a chocobo talon motif. 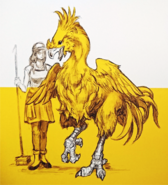 Artwork of a black chocobo.

Artwork depicting a yellow and black chocobo that was released for Christmas, 2015.