Dravania (trained and bred in Ishgard)

Despite the emergence of airships, chocobos have retained their place as a traveler's best friend. Be it as bearers of a merchant’s wares, steeds for battle-bound soldiers, or an adventurer's means of locomotion, the long-legged avian creatures are still very much a common sight.

Chocobo is a prominent avian creature in the realm of Eorzea within the Source, and a feature in several aspects of the gameplay of Final Fantasy XIV. As with most entries in the Final Fantasy series, chocobos are a popular form of transportation, though they also featured in racing, are fought as enemies, and feature as companions and minions.

Chocobos live within the eastern parts of Dravania, with the Chocobo Forest in the Dravanian Forelands being home to many wild chocobos. Chocobos are usually trained and bred in Ishgard. At the launch of the original version of Final Fantasy XIV, a mysterious plague infected the birds greatly reducing their numbers and forcing the city-state stables to stop renting the birds to adventurers. The plague started to subside, and with help of the newly reformed Grand Companies, the Holy See again permitted the exporting of chocobos with the caveat that only male birds were exported to avoid breeding outside of their control. Chocobo rentals have since opened up, and Grand Company members can be granted their own company chocobo as their steed.

Chocobos are not widely known in the "Far Eastern" territories of Yanxia and Koshu, with Doman refugees in Eorzea referring to them as "horsebirds".

Chocobos are typically larger than Hyur, though some breeds, such as the Belah'dian jennets and destriers, are smaller or larger to accommodate Lalafellin and Roegadyn riders, respectively. Though the yellow feather coloration is the most common, chocobos can be found in many shades, either through genetics or from dietary influences. Trained chocobos are called upon using hand-crafted whistles that emit high-pitched tones the chocobos are trained from birth to recognize. These trained birds are most often found in stables, looked after by "chocobokeeps".

In the wild, untamed chocobos are territorial, and can easily injure a person with their beaks and claws. Chocobo hunters, such as those residing in Tailfeather, often hunt and trap wild chocobos to sell.

Chocobos are a common mounts. To rent a chocobo, players need to speak to a Chocobokeep at each city-state's chocobo stables and pay 800 gil for a 10-minute ride. Chocobo porters can be hired to transport the player character directly along a pre-set route, allowing the player to move to previously visited locations.

To unlock Grand Company personal chocobos, players must join a Grand Company and complete the quest My Little Chocobo, which involves buying a Chocobo License for 200 company seals, then presenting it at the stables to name their bird. These personal Company chocobos may be called from outside cities and dungeons by assigning either the specific mount icon or the general mount icon to a hotbar and either clicking the hotbar or pressing the assigned key or button.

Initially the company chocobo mount could only traverse grounded terrain, requiring players can obtain a black chocobo flying mount from the quest

I Believe I Can Fly was also available, allowing the company chocobo to fly. In patch 5.3 which made flying available in A Realm Reborn areas, the requirement for company chocobos to gain flight was removed, with flight unlocked upon completing the quest

Other kinds of chocobo mounts can be obtained through special promotions or certain achievements. The Fat Chocobo is available as a PlayStation 4 Collector's Edition reward, and the player is depicted dangling gysahl greens in front of the bird to encourage it to move. The Parade Chocobo is a variation of the Fat Chocobo awarded for the "Leaving a Better Impression II" achievement. The Draught Chocobo is a reward from the Recruit a Friend Campaign, awarded when a new player has subscribed for 90 days. This chocobo, distinguished by white-tipped feathers, is much larger than other breeds and can seat up to two players. The Ceremony Chocobo is a white version of the Draught Chocobo, obtained through an Eternal Bond ceremony.

There is no limit to how often a player can call their chocobo, with the exception of when an enemy is engaged. There is a risk of being attacked by monsters and either lamed (slowed) or forcibly dismounted. Players cannot ride unharmed through dangerous areas. Personal chocobos, fat chocobos, and rental chocobos have different riding music. None of the special chocobo mounts can be summoned as companions or change their plumage color. Beginning with Patch 3.1, the two-seater and fat chocobo mounts became capable of flight in properly attuned areas, the latter types being motivated by dangling a cake in front of it.

Several minions are in the form of a chocobo hatchling, usually distinguished its headwear or plumage color.

Companions are provided by Grand Companies, as the same chocobo provided as a mount can be trained as Companion following the quest

My Feisty Little Chocobo. They fill the role of tank, healer or DPS depending on the player's preference and how the companions are raised, although they cannot participate in duties. Companions are customizable with various cosmetic bardings.

A minigame added in patch 2.51 alongside Triple Triad, chocobos can be owned and raced in the Manderville Gold Saucer as a sidequest. Racing chocobos can be bred to create faster breeds.

Throughout the Dravanian Forelands, untamed chocobos are fought as enemies. Exotic black and red chocobos can also be encountered as enemies in the Far East regions of Othard, and

The Hunt for Red Choctober features a red chocobo in the Bozjan Southern Front.

The Fat Chocobo mount appears as Y'jhimei's steed in the Adventurer from Another World collaboration quest, whom Prompto Argentum dubs "Mr. Chunkobo". Y'jhimei is not seen riding it, but it sits on her when hungry and the player must feed it some Premium Gysahl Greens to make it move. It follows the party to Perpetouss Keep where the party comments on its bravery, Gladiolus Amicitia calling it a "noble steed". 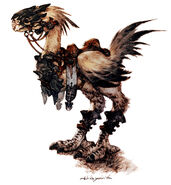 Concept art of a chocobo with white mage barding.

Concept art of a chocobo with black mage barding.

Concept art of a chocobo with dragoon barding.

Concept art of a chocobo with tank barding.

Concept art of a chocobo with a Sleipnir barding.

Concept art of a chocobo with behemoth barding.

Artwork of a Red Mage riding a chocobo.