Chocobos have had a colorful history in the world of Spira. Due to the ban of machina, chocobo-powered machines were in wide demand until the coming of the Eternal Calm. After the machina ban was lifted, the demand of chocobo-powered products fell.

Chocobos are most commonly seen on the Mi'ihen Highroad. Chocobos demonstrate a skill in jumping, allowing them to reach high ledges by combined leaping and flapping of their wings to gain extra height.

Chocobos can be first spotted during the sea voyage to Kilika, where Tidus can wander to the engine room to see chocobos running on a gigantic "hamster wheel", powering the ship. The woman who looks after the chocobos on the ship hums the "Chocobo Theme".

Chocobos are later encountered on the Mi'ihen Highroad, where the player can ride them for a fee, and also encounter the chocobo's natural enemy, the Chocobo Eater. Chocobos are also seen whenever the player meets with the Chocobo Knights. The Thunder Plains travel agency has a chocobo rental sign despite not being available. On the Calm Lands the player can play a racing minigame, required to get the item for upgrading Tidus's Celestial Weapon, the Caladbolg.

Chocobos make a reappearance. If the player advises Clasko to quit the Chocobo Knights and invites him onboard the Celsius (he is found outside Mushroom Rock Road after the "Foggy Fiend Frenzy!" mission in Chapter 1), he will eventually find his way to the ranch on the Calm Lands where the player can hire stables for caught chocobos.

The player can play four types of chocobo races on the Calm Lands, used as a method of taming and training wild chocobos. The player can find an NPC on the plains who lets Tidus race chocobos and after having tamed a chocobo, the player can take the chocobo for a ride around the Calm Lands. In the hardest race, the racer must catch as many balloons on the track as possible while avoiding incoming birds. The racer with the better final time wins (a bird adds three seconds while a balloon removes three seconds from the racing time). To win the Sun Sigil for Tidus's Celestial Weapon, a time of 00:00 is required.

By riding a chocobo, the player can reach the Remiem Temple on the southeast of the Calm Lands. On the temple grounds the player can ride a chocobo though a maze of platforms below the temple, and has to reach the finish mark at the bottom before the opponent chocobo. The first time the player is successful, they will get the Cloudy Mirror, which can be upgraded to the Celestial Mirror in Macalania Woods. The race can be run numerous times for additional prizes.

On the Mi'ihen Highroad the player can help Calli catch a chocobo on the "Cuckoo for Chocobos!" mission. The mission becomes available when the party returns to the Celsius after they hand over the Awesome Sphere, and the mission reward is Selene Guard. After catching the chocobo, the player should invite both Calli and the chocobo on-board the Celsius by immediately going back to the Highroad and talking to Calli.

A chocobo is required to obtain Victor Primoris, the special dressphere upgrade for Paine. If the Mi'ihen Highroad Mystery is solved by accusing Prophet of being the culprit, chocobos will be replaced by Hovers, and the upgrade cannot be then obtained other than in a New Game Plus.

ChocoPorter is Shinra's invention introduced during Chapter 4 when using the CommSphere at Thunder Plains. It is used to teleport a chocobo from the plains to the Celsius. After the second use, the ChocoPorter breaks.

Chocobos can be caught and sent to the Calm Lands Ruins after the player has cleared the ranch of fiends and obtained some greens from Clasko. Chocobos will occasionally be encountered in battles even before that, but will always run away. To catch a chocobo they must be faced in the field alongside fiends in random encounters. Although they are more inclined to run than to stay and fight, chocobos can fend for themselves when pushed. Chocobos can heal themselves with Choco Cure and cast supportive magic, as well as attack with Choco Kick and Choco Meteor.

Chocobos are immune to Gravity as well as to most status changing spells. They are resistant to Eject, Zantetsu, and, at higher levels, Confuse.

To capture a chocobo, the catcher must entice it to stay by offering it Gysahl Greens and maintain a steady supply of the greens while clearing away the accompanying fiends. When the fiends have been defeated one more Gysahl Green should be enough to ensure capture. During the battle the chocobo may attack; it is important the catcher does not retaliate, or the chocobo will almost certainly run away.

Created and run by Clasko during the Eternal Calm, the Calm Lands Ruins used to be a fiend hunter-styled zoo, called the Monster Arena, that had fallen into disrepair. Upon discovery the ruins had to be cleaned out of fiends if any chocobo were to be safely raised inside. The Gullwings assisted greatly in the production of the ranch, first being instrumental in the "cleaning out" of the facilities and secondly allowing any chocobo that they caught to be raised at the ruins.

First discovered beneath the Calm Lands Ruins, the Amazing Chocobo was guarded by an Anything Eater before being freed by the Gullwings. The Amazing Chocobo is bright gold and capable of flight. It also demonstrates a great degree of intelligence and initiative in comparison to other common chocobos.

The main facility provides accommodation for a total of 14 chocobos. The chocobos are raised with a diet of nutrient greens such as Pahsana, Mimett, and Sylkis, as well as the use of Gysahl Greens as a candy-like treat. The chocobos are eventually trained as dispatch go-fores as they are instructed to explore certain areas of Spira and return with items and treasures. Thus is how the ranch provides its income.

Paine's Festivalist mask in Final Fantasy X-2 is that of Chocobo from the Chocobo series. 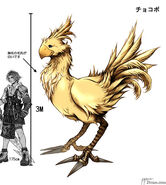 Player jumps on a chocobo in Final Fantasy X.