They live in the 7 Chocobo forests around the World. Adults and children are called Chocobos and Chicobos respectively. Chicobos are spotted often, whereas Chocobos are rarely seen. Loved for their gentle nature, Chocobos respond quickly to Chicobos in danger.

I don't want any small ones. I need to be able to ride it.

Chocobos in Final Fantasy VIII are obtained through Chocobo Forests where, with the help of Chocoboy, Squall can capture a mother chocobo to ride around the country. Chocobos are generally shy until one earns their trust.

Only the yellow breed of chocobo have been shown to exist in Final Fantasy VIII, but they possess a few abilities not normally associated with their kind. Most notably, they possess the ability to cross small rivers and shallow water, a trait usually associated with blue chocobos. In endgame, entering a Chocobo Forest gains access to a chocobo that can be used to travel to the Kashkabald Desert to gain access to the game's airship, Ragnarok.

Final Fantasy VIII also sheds some light upon the chocobo's 'family life', revealing that the chicobo (baby chocobo) is raised by the female chocobo and is also protected by her in the Chocobo Forests. Chicobos are attracted to the ChocoZiner and will appear when called by it, but usually they will stay with their mother throughout infancy, following along behind if the mother goes wandering.

The chocobos also have a sacred dance they offer to perform for those they deem worthy.

The minigame Chocobo World, which can be played on a PocketStation—a device sold exclusively in Japan—unlocks certain items in Final Fantasy VIII. The game is included in the PC-version of Final Fantasy VIII, but was excluded in the updated re-release Final Fantasy VIII Remastered. The protagonist is a chicobo called Boko who, along with friends Cactuar and Moomba, must rescue their friend MiniMog (a moogle) from the evil Demon King in Scary Mountain. During his adventures Boko must fight other monsters and overcome many perils, as well as fighting the urge to watch his television set and go fishing.

Squall and his friends can summon Boko into battle using Gysahl Greens after acquiring him by completing a chocobo forest puzzle. Boko has four attacks: ChocoFire, ChocoFlare, ChocoMeteor and ChocoBocle, each more powerful than the previous. To get the different attacks Boko must reach a certain level and trigger an event in Chocobo World. In Remastered, his attack depends on Squall's level. Boko's ultimate attack, Chocobocle, summons a Chubby Chocobo in an attack that can break the damage limit.

There are two chocobo themes in Final Fantasy VIII. The first is featured when riding a chocobo on the field, called "Mods de Chocobo". The second is featured in the town of Winhill next to a chocobo crossing, it is called "ODEKA ke Chocobo". "ODEKA ke Chocobo" is also the featured theme in Chocobo World. "Mod" is a type of subculture that originated in London in 1950s, associated with African American soul, Jamaican ska, British beat music and R&B.

The Chicobo has a card in the Final Fantasy Trading Card Game.

Chocobo is depicted on cars' hood ornaments in some FMVs. One such car is the Tempest, while another car is crushed by the X-ATM092 in Dollet.

Two chocobos appear on the background during the Timber train mission. This can be considered odd, as the Galbadian continent has no Chocobo Forests.

The Chocobo's Tag item is only obtained from the Chocobo World, as item rank B or C. It changes Boko's name. The item is dummied in Final Fantasy VIII Remastered.

A student in Balamb Garden mentions that due to the worldwide signal interference, communication is either done online, or sometimes using chocobos as messengers.

After Squall and Rinoa return on the Ragnarok and Rinoa leaves for the Sorceress Memorial, the third party member from Lunar Base finds him. If the party member is Selphie, she explains she found a chocobo and thus discovered the airship. The Esthar mainland is not shown having Chocobo Forests. 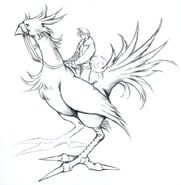 Concept art of the chocobo crossing in Winhill with chocobos.

Chicobos in a Chocobo Forest.

Mother chocobo in a Chocobo Forest.

Chocobos dance at the sanctuary.
Add a photo to this gallery