The Chocobo is an earth-elemental Eidolon from Final Fantasy Dimensions II. There are two versions of the Chocobo available in the game; Morrow's version, which teaches Strike abilities, and a version available to Aemo, which teaches her Cure abilities. Both versions are one of the two default equip signets for both Morrow and Aemo at the start of the game. Aside from their usefulness in the opening portions of the game, the Chocobo signets are among the weakest in the entire game.

Both versions of the Chocobo share the Choco Kick summon attack, which deals small earth-elemental damage to all enemies. Summoning the Chocobo costs 1 bar from the Summon Gauge.

The following are the abilities Morrow can learn from his version the Chocobo:

The following are the abilities Aemo can learn from her version of the Chocobo:

In the original free-to-play versions of the game there were three versions of the Chocobo signet that would become exclusive to Morrow in the premium version, one that taught Strike abilities, another variant that taught Cure abilities, and a third version that taught Regen abilities. However, the artwork used for the signet was not the same as the one used in the premium releases, instead the Chocobo signet used an original artwork created by the game's director, Takashi Tokita.

Similar to the premium version, Morrow initially started with a Strike-version of the summon in the free-to-play versions. Unlike other summons, the Chocobo signets could not be obtained in the game's summon draw shop, but instead could only be obtained as a possible treasure box result for completing a battlefield in Present Navos Forest or through Babil Tower.

Aemo's version of the Chocobo was originally a unique version of the Chocobo signet known as Chocobo α (チョコボ α, Chokobo α?), which taught Choco Quick abilities and had the Chocobuckle summon attack. The signet's artwork was done by guest illustrator Ken Sugimori of Game Freak, best known for his illustrations for the Pokémon series of games.[1] In the premium version, Aemo's version only teaches the Cure ability instead and had its former abilities removed from the game.

In addition, there was another unique version of the Chocobo signet that appeared exclusively in the free-to-play versions of the game known as Chocobo OR (チョコボ OR, Chokobo OR?). The Chocobo OR summmon was an earth-elemental signet that used the Chocobo sprites from the original cellphone versions of Final Fantasy Dimensions. The signets could only be obtained through participating in the "Escape de Chocobo" event in Final Fantasy Legends: Toki no Suishō. The Chocobo OR signets taught the Rapid Cure abilities. 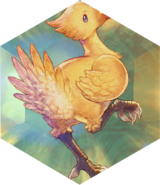 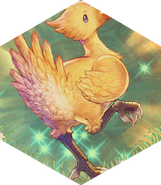 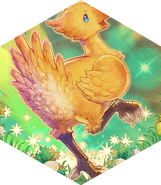 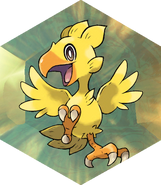 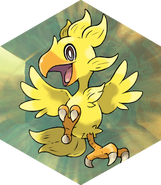 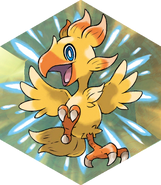 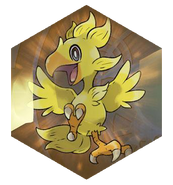 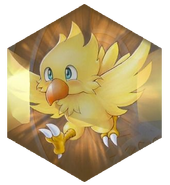 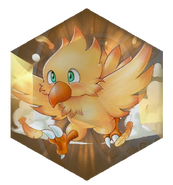 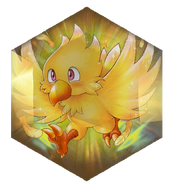 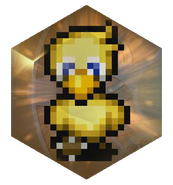 Chocobo OR signet (A version, Toki no Suishō). 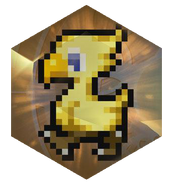 Chocobo OR signet (B version, Toki no Suishō).