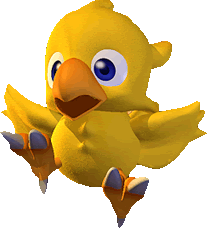 Chocobo, also called Poulet (プーレ, Pūre?), is the main protagonist in the Chocobo series. A young chocobo, he is the only chocobo who doesn't speak the language of the humans, but he is certainly the bravest.

Poulet is the main protagonist.

This section in Chocobo no Fushigi na Dungeon is empty or needs to be expanded. You can help the Final Fantasy Wiki by expanding it.

Chocobo is the main protagonist. He goes treasure hunting with his friend Mog and finds the mysterious dungeon. He can equip claws and saddles, use spellbooks, use certain objects in the dungeon and equip stones or bottles to throw at enemies. In the opening sequence, he has an anklet with a blue gem in the center on its right feet.

One day Chocobo was given the Jet-Blades by Cid to test out. While testing it out, Mog comes in to ask Cid how his racing machine was doing. Cid promises to give it to him the next day, but tells Chocobo he had completely forgotten about it. The next day, much to Mog's disappointment, Cid gives him a scooter "with a honkin' horn".

Mog then challenges Chocobo to a race. The yellow bird wins the race and Cid tells Mog that partly why Chocobo won is because of the blue crystal on his leg. Disappointed by his own ability, Cid suggests to Mog that he go on an adventure with Chocobo to uncover the secret to the blue crystal.

Chocobo's crystal ability is "Dash", which allows him to gain a burst of speed for a short time. The Jet-Blades that he uses in the races is quite difficult to handle, despite him being the main character, but he's a tough CPU opponent to be reckoned with. When dealing with Chocobo as a CPU opponent, he will hold onto any three stones he gets that's not a Doom stone then use them when he gets the third stone. This can be troublesome if he's holding Reflect stones and he has a solid lead during the current race. 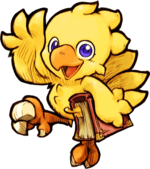 Chocobo was discovered by Shirma while still young. He was one of the many casualties of the great war, but Shirma took him to Chocobo Farm on a far away island. There he lived happily with the other Chocobos.

One day, Croma brought a strange tome to the farm. Unable to open it, Chocobo had a look at it and managed to unlock it. Upon doing so, he released the evil demon Bebuzzu, who then sucked up all the Chocobos into cards.

Determined to free his friends, Chocobo set with Shirma and Croma to restore the crystals which had lost their light. However, every time they reached a crystal, the mysterious Irma had beaten them to it, and helped Bebuzzu drain the crystal. Each time though, Chocobo managed to beat the demon, causing him to retreat. Each crystal slowly reveals that Chocobo is no ordinary chocobo, but the descendant of a Light Warrior.

At the lightning crystal, Bebuzzu revealed he had spared Chocobo for a reason, knowing him to be the Chocobo that would travel to each crystal, making it easy for him to drain them. With this, he kidnaps Irma, knowing that her death would fully restore him.

Chocobo then proceeds to the Dark World with Volg to free Irma. They succeed in killing the demon and seal him up once again. With Bebuzzu now gone, life returns to normal at the farm, and Chocobo can now rest with his friends again.

Chocobo is also one of the five Promo cards. In the Japanese and American versions, he must be downloaded from a download station. In the European version, the player simply has to enter the code R, Y, Right, Down, L, A on the Download Pop-Up Card screen. 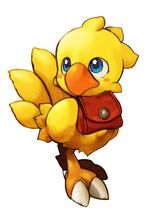 Chocobo travels along with Cid as treasure hunters. He is sent to Lostime with Cid when Irma takes Timeless Power. One night a baby named Raffaello, who has a mysterious power to restore people's memories, falls from the sky. Chocobo obtains a brooch from the egg and with it, enter mysterious dungeons formed from memories.

Along the way, Chocobo encounters Croma, who warns him not to interfere. It is revealed that Chocobo's attempts to restore the memories of the people of Lostime were part of a scheme by the Destroyer to undo the seal on him, and lured Chocobo and Cid with Timeless Power to do it.

Though Chocobo gained the ire of the townsfolk for helping the Destroyer, Mayor Gale settles them down and asked that they forgive him. Mayor Gale went on to tell Chocobo that Raffaello still survives within the Destroyer and that it is only a matter of time before he is completely assimilated. Chocobo takes off on Cid's completed airship to the Floating Fortress, determined to save his new friend.

At first he was bested, but the power of the oracles gave Chocobo the strength he needed to defeat the Destroyer. As the Fortress collapsed, Chocobo landed on Cid's airship, piloted by Raffaello with Croma in tow. Everyone congratulated Chocobo for saving Lostime as the barrier surrounding it falls. The citizens constructed a statue of Chocobo in the park in his honor.

When Raffaello departs on the airship to atone for his sins as the Destroyer, a saddened Chocobo chased after him, letting out a distressed cry as he flew away.

Chocobo is friendly, courageous, and kind. His dream was to fly, something he remembers when Chocobo's Memories is cleared.

The ever inquisitive Chocobo travels to the island of Mirion and is embroiled in the adventure involving Cid's Alvanica picture book series.

The mask Paine wears in the Festivalist dressphere resembles Chocobo from the Chocobo series games.

A chocobo based in the Chocobo series' main character appears in Omega - The Bend of Time, the Stormblood sidestory of high-end raids.

Originally thought to be an otherworldly chocobo by the Garlond Ironworks members, it is later discovered that the chocobo is named Alpha, an artificial life created by Omega. Alpha travels alongside the Warrior of Light so they can fight in the Interdimensional Rift. Omega based Alpha upon what he describes as a "most ordinary life-form" which had bested an enemy whose strength rivaled his own. 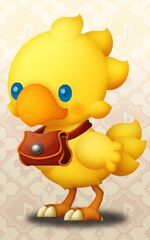 A hat based off the Chocobo series character appears used by Mii Fighters.

The series have spawned multiple original soundtracks from each of the titles. Masashi Hamauzu was the first to compose for the series. Later compositions were written by Kumi Tanioka and Kenji Ito. Most of the tracks are remix or rearrangements of songs from different Final Fantasy titles by Nobuo Uematsu.