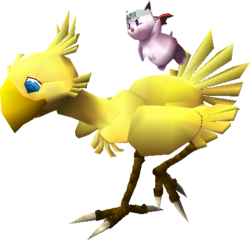 Choco/Mog is the first Summon Materia the player can obtain in the game. The Materia can be obtained from the chocobos at Chocobo Farm.

It Deathblow!! (必殺技‼, Hissatsuwaza‼?) attack is a weak non-elemental attack that has a 40% chance of inflicting the enemies with Stop. It requires 14 MP to be summoned, and is mastered with 35,000 AP.

The Choco/Mog Materia is Wind-elemental, making it the one of two Materia where the attack does not reflect the element of the Materia.

Chocobo & Moogle is set to appear as a summon in the remake.

While equipping the Summon Materia, the player can summon once the gauge fills up. Summons fight alongside the player on the battlefield, but the player can also use their own ATB charges to have them perform special abilities, like Chocobo & Moogle's モグバクダン (Mogu Bakudan?, lit. Moogle Bomb) ability.[1] Just before they exit the fight, the summon will unleash a special move.[2]

Similar to the original, Chocobo and Moogle's special move is "Stampede" (必殺技‼, Hissatsuwaza!!?), which run downs the enemy with a herd of chocobos.

Chocobo & Moogle is an ability card.