Choco/Mog is the first Summon Materia the player can obtain in the game. The Materia can be obtained from the chocobos at Chocobo Farm.

It Deathblow!! (必殺技‼, Hissatsuwaza‼?) attack is a weak non-elemental attack that has a 40% chance of inflicting the enemies with Stop. It requires 14 MP to be summoned, and is mastered with 35,000 AP. There is a 15/256 chance that a Fat Chocobo will appear instead of Choco/Mog, which deals 25% more damage than the normal summon and is also non-elemental, but does not inflict Stop. Fat Chocobo's spell power is equal to 1.25x the base magic damage, while the Deathblow!! version is equal to the base magic damage.

The Choco/Mog Materia is Wind-elemental, making it the one of two Materia where the attack does not reflect the element of the Materia.

Chocobo & Moogle is a

Summoning Materia that can be obtained in the discovery sidequest "Inside the Ventilation Fan" during "Light the Way", the eighth chapter. The chocobo performs

Wind-elemental attacks, meaning that the summon is most effective against bosses who are weak to wind. Chocobo & Moogle's special move is Stampede (必殺技‼, Hissatsuwaza!!?, lit. Killing Blow!!), which runs down the enemy with a herd of chocobos.

Chocobo & Moogle is an ability card. 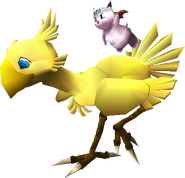 Render from the original game. 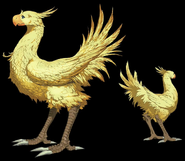 Concept art of chocobo for the remake.

"Choco" is short for "chocobo". [view · edit · purge]The name "chocobo" derives from a Japanese brand of chocolate malt ball by Morinaga, ChocoBall (チョコボール, Chokobōru?). The mascot for this product is Kyoro-chan (キョロちゃん?), a bird who says "kweh".