Legend was true, kupo! I'll tell you a secret. I'm looking for paradise on earth! Only chosen chocobos can evolve and lead their masters to that paradise, kupo! Let's evolve Choco so that we can go to paradise! Kupo!

Chocobo's Paradise is a location in Final Fantasy IX. It is a realm where chocobos can live free, under the rule of the Fat Chocobo. It was established over 5,000 years ago.[1] The famous explorer Ipsen may have once visited here, as if the player challenges the chocobos to card games, the Fat Chocobo says that a traveler had taught him how to play, and the dark blue chocobo mentions that they learned to play cards from Ipsen.

. Choco needs the ability to fly to get here, and thus the player needs to progress far enough in the Chocobo Hot and Cold sidequest to gain the skill. The residents give various hints to hidden treasures on the world map that can only be found by using Dead Peppers while riding on Choco.

When Zidane first visits Chocobo's Paradise, Mene is already there, waiting for him. The Fat Chocobo greets them, allowing them to understand the language of the chocobos, and after congratulating Choco for finding the place, offers him to live there. Mene asks if he can stay too, but the Fat Chocobo tells him that only chocobos are allowed in Chocobo's Paradise. Mene then asks if Choco can stay with Zidane until they have found all the remaining treasures in the world, which the Fat Chocobo accepts.

Once they return after finding all treasures in the world, the Fat Chocobo again implores Choco to stay, and Zidane and Mene are left on their own to find a way out of the island. Zidane wants Mene to fly him off the island, but is too heavy for Mene to lift. Out of options, they hear Choco's call from high above, and Choco rushes down to join them, unwilling to remain in Chocobo's Paradise without his friends.

The two gold chocobos seated to the left and right of the Fat Chocobo will say different things depending on the player's progression in the Chocobo Hot and Cold sidequest. The right chocobo will initially explain how to use the Chocograph Pieces to gain access to Chocobo's Air Garden by spotting its shadow, but once the player has found all 24 Chocograph treasures, he will instead mention that Dead Peppers can be used to reveal hidden treasures on the world map. The left chocobo initially tells Zidane a bit of the place's history, but after the player has either found all 24 Chocograph treasures, or used Dead Peppers on all mountain cracks, ocean bubbles and visited Chocobo's Air Garden once, he will relinquish 99 Dead Peppers every time he is talked to if the player has fewer than this.

The three colored chocobos in the upper area, as well as the gold chocobo in the lower area, provide clues to the whereabouts of the mountain cracks and ocean bubbles where Dead Peppers can be used, revealing hidden treasures or entrances to secret locations (the player can find these without obtaining the clues beforehand). They give two clues each: one by talking to them with the normal prompt, and the other with the Tetra Master prompt (the player can then say "No" to playing cards if they do not actually want to challenge them). The ninth and final clue becomes available after the player has used Dead Peppers on all mountain cracks, ocean bubbles and visited Chocobo's Air Garden once, and only after Shimmering Island has sunk. It is given by the Fat Chocobo when using the Tetra Master prompt.

To talk to the light blue and dark blue chocobos, the player needs to find the prompts in the lower-right corner of the upper area to slide/jump to reach them. Going behind the bush in the lower right gets the player to the top. Jumping into the central pool from there makes the light blue chocobo get out of the water. The player can then talk to him. To reach the dark blue chocobo, the player must go behind the building on the right side of the screen to ride the tallest slide, and then jump off when the prompt appears near where the dark blue chocobo is standing. Both the red chocobo and the gold chocobo (in the lower area) cannot be talked to right away. The red chocobo is standing on an unreachable platform, but comes down next to the pool once all 24 Chocograph treasures have been found (or once all Dead Pepper treasures/entrances have been revealed, at which point the chocobos no longer give clues anyway). The gold chocobo initially flees from the player when approached, but will stand still once at least four Dead Pepper treasures/entrances have been revealed.

When the player returns to Chocobo's Paradise after finding all 24 Chocograph treasures and using Dead Peppers on all mountain cracks and ocean bubbles, the Fat Chocobo congratulates Choco and asks him to remain in Chocobo's Paradise for good, much to the chagrin of Zidane and Mene. The Fat Chocobo comforts them by giving them his Tetra Master card (as well as all cards recovered from Chocograph or hidden treasures that the player was unable to keep because their card quota was full). Choco initially accepts the offer, but once Zidane and Mene realize that they are trapped on the island, Choco decides to stay with them instead.

After Choco has decided to stay with Zidane for good, the player can go back to Chocobo's Paradise and talk to the Fat Chocobo with the Tetra Master prompt. He will tell Zidane to visit every beach in the world. The player can then visit every area that has a beach in Gaia (they do not need to stand on the beach itself, just in the general area), dismount Choco and press

(Steam version). A chime will play in confirmation. In Final Fantast IX Remastered, a beach prompt appears when in a suitable area. On the last beach, the player's HP and MP will be restored. The player can then, at any time, go to or near a beach to be instantly healed.

If the player challenges the Fat Chocobo to a card game, he reveals that a traveler once taught him how to play. This was likely the famous explorer Ipsen, as the dark blue chocobo mentions him as well when challenged. All of the Fat Chocobo's cards are chocobos. There is a very rare chance to win a Fat Chocobo or Boco card from him. All of the clue-giving chocobos, as well as the yellow chocobo in the lower area, also play cards.

While there are no encounters inside Chocobo's Paradise, the Uaho Island world map area it is on does have encounters. Though these are the same on all four discs, in a normal playthrough, the player cannot come to the island until they have either an airship or a gold Choco, which is possible to achieve on disc 3 at the earliest. 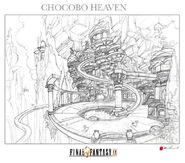 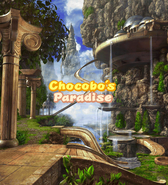 [view · edit · purge]Paradise is a religious or metaphysical term for a place in which existence is positive, harmonious and eternal. Paradise is often described as a "higher place", the holiest place, in contrast to this world, or underworlds such as Hell.