Most of the treasures are buried deep, and require a high beak level to reach quickly, but they net higher treasure points and time bonus. By quick-saving and reloading, players using emulators can easily gain the points needed to exchange the Robe of Lords and Protect Ring.

"Aloha de Chocobo" plays while in Chocobo's Air Garden. During the search for treasures in Chocobo Hot and Cold, the music switches to "Vamo'alla flamenco". 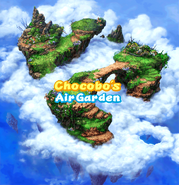 The Air Garden's shadow on the surface of the world map.