Attack by raining down a small meteor.

ChocoMeteor is used by Boko when he is summoned into battle using Gysahl Greens, and is his second-most powerful attack. In the original version Boko learns ChocoMeteor by training in the Chocobo World, meaning most international players never got to see the attack in the PlayStation version. In Final Fantasy VIII Remastered, Chocobo World is not available, and Boko can use his special skills natively, and which attack he uses depends on Squall's level.[1] Boko uses ChocoMeteor between LV50–74.

Its damage is calculated as follows:[2]

Choco-Meteo is used by chocobos when encountered as opponents. It consists of twelve non-elemental attacks that reduce a random party member's HP by 12.5% with each hit, although by chaining the hits may deal additional damage. This attack is used by bold chocobos—timid and normal chocobos will never use it.

A captured chocobo for the player's team in the Creature Creator can learn Meteor at level 40 after being hit by a powerful move like Flare or Ultima.

Choco-Comet is used by chocobos when fought as enemies, including the Trickster mark. It does high magick damage to all enemies. It is especially dangerous when used by the Lv.99 Red Chocobo.

Summons a meteor from the heavens to wreak havoc on all other chocobos.

Choco Meteor is an item usable during chocobo races.

During the quests leading up to the second Ivalice Alliance Raid, the Hero of Light must save a moogle named Montblanc from a pair of hostile red chocobos in Yanxia. They will occasionally cast Choco Meteor, which deals heavy damage and leaves those hit with a vulnerability debuff.

Choco Meteor can be learned by Blue Mages. The attack deals unaspected damage with 200 potency to the targeted enemy, with any other enemies near the target also taking damage at 50% of the usual potency. If the player's companion chocobo is currently summoned, the attack's potency is increased to 300.

Choco Meteor is used by Red Chocobos and does high damage to a single target. It targets a single square within five squares of the user. The Choco Meteor's meteorite is in the shape of a chocobo's head.

Choco Meteor is exclusive to Red Chocobos, and does magick damage to all target within the area of effect.

The Chocobo Knight can use this ability while in control of a Red Chocobo.

Choco Meteor is the name of Jun Saruwatari's ultimate table tennis move in Another Mind, a Japan-only PlayStation visual novel adventure game released by Squaresoft in 1998. 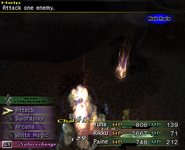 A better view of the meteorite of Choco Meteor (Final Fantasy Tactics).

"Choco" is short for "chocobo". [view · edit · purge]The name "chocobo" derives from a Japanese brand of chocolate malt ball by Morinaga, ChocoBall (チョコボール, Chokobōru?). The mascot for this product is Kyoro-chan (キョロちゃん?), a bird who says "kweh".

This means that the use of the word "meteor" in spell names in Final Fantasy is incorrect, as parts that withstand the atmospheric entry are called meteorites.