Choco is a chocobo in Final Fantasy IX used to play the Chocobo Hot and Cold minigame and for riding on the world map. Choco is found in the Chocobo's Forest where the moogle Mene teaches Zidane Tribal how to ride and call Choco with Gysahl Greens. Choco can be summoned on the world map by standing on chocobo footprints and using a Gysahl Green in the menu.

Choco initially starts off as a generic yellow chocobo, however, he will find Chocographs that lead him to treasure chests that will grant new abilities and allow Choco to traverse varying types of terrain.

Choco escaped from his previous master, who was mistreating him, and began a new, more peaceful life with Mene the moogle in Chocobo's Forest. Mene provides Zidane with Gysahl Greens to befriend Choco in the hope that Zidane will take Choco adventuring around the world, find treasure, and build his abilities.

Choco is searching for paradise on earth, a legendary respite for chocobos. Throughout Zidane and Choco's journeys, Choco is periodically taken to Chocobo's Dream World where he is bestowed the abilities he needs to reach Chocobo's Paradise.

Upon Choco's arrival in Chocobo's Paradise, Mene is shocked to learn from the Fat Chocobo that only chocobos may live there and that moogles are not welcome. Choco still has more treasure to find in the world, so the group leaves with the promise that Choco will return.

The promise is eventually kept and though Mene pleads his case, he is told once again that he cannot stay. Mene reluctantly leaves at Zidane's urging, and the two wrestle with the question of how Zidane is supposed to get back home with Mene trying to carry him, but only able to fly briefly before falling. The two hear a "Kweeeh!", which turns out to be Choco who has decided to remain with his friends. Mene says that Choco returned because he needs him, though Zidane feels it's the other way around. Mene is delighted, and tells Zidane that he'll be heading back to the Chocobo's Forest. The other chocobos accept Choco's decision, but are puzzled why he wouldn't want to stay in paradise.

Choco can be ridden on the world map, and the terrain he can cross depends on what abilities he has learned from the treasures he has uncovered. When Choco learns a new ability he is transported to Chocobo's Dream World and changes color. Choco can be called via Gysahl Greens on the world map.

Chocobo Hot and Cold is a sidequest and minigame spanning a number of locations and being the means to unveiling a number of new locations otherwise unvisitable. The minigame itself appears in two forms, one played in chocobo dig sites, and one played on the world map.

At some areas of the world map, the player may find foaming water or a mountainside with a crack. Using a Dead Pepper at these locations causes Choco to dive into the water or dig into the mountain, finding treasure. These treasures are separate from the Chocographs unveiled during the digging minigame. The various chocobos at Chocobo's Paradise will hint at their locations after speaking with Fat Chocobo for the first time. 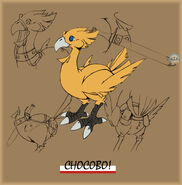 Zidane riding on Choco on the overworld, with a Chocograph on top of the World Map.

Choco is short for "Chocobo". [view · edit · purge]The name "chocobo" derives from a Japanese brand of chocolate malt ball by Morinaga, ChocoBall (チョコボール, Chokobōru?). The mascot for this product is Kyoro-chan (キョロちゃん?), a bird who says "kweh".