It is my honor to repay you for all you have shared with me in our journey together.

Chizuru is a character and summonable vision from Final Fantasy Brave Exvius. A samurai from the Kingdom of Pharm, Chizuru's vision can be summoned by Rain and Lasswell to aid them in their battles.

4★ - No. 0217: A samurai who valued loyalty and decorum, and wielded her blade only in service to her master. Chizuru and her fellow samurai, honorable warriors of great pride not unlike the knights of today, are occasionally referenced in historical chronicles, but specific details of the time period in which they lived and the lands from which they hailed are scarce.
5★ - No. 0218: A katana-wielding samurai of great strength who served her master with undying loyalty by cultivating both body and spirit. After Chizuru retired from her duties, she married a ninja in the service of her lord and master, giving birth to both a son and a daughter. Sadly, due to strife within her clan, she lost her daughter to the shadows, filling her with grief until the end of her days.
6★ - No. 0384: Known as a samurai, she wields her blade out of loyalty for her master. She lived in accordance to the samurai code, and even after retiring she taught it to her children. However, after her daughter was taken in by the darkness, she left her family and master behind, instead deciding to take her own life by committing seppuku.
Entries for different versions of Chizuru.

Originally an inhabitant of the Pharm continent,[1] Chizuru became a samurai and pledged herself in service to her master, whom she served with undying loyalty. Eventually, Chizuru retired from her duties and married the ninja Jiraiya who was also in the service of her master. She had two children with him, Hayate and Miyuki,[1] whom she taught the samurai code, but who became ninjas.

The older of the two, Hayate, inherited Chizuru's grave demeanor. Hayate however grew jealous and resentful of Miyuki's talents as a warrior and their father's apparent favour of her over Hayate, which reached its peak when Jiraiya gifted her the family heirloom, the Sakurafubuki Katana. This caused a rift in the family, one that Chizuru tried to fix by attempting to convince her husband to give more attention into Hayate and taking into account their children emotional care. Jiraiya however preferred to keep training Miyuki believing she was at the key age to progress as a warrior, neglectfully believing Hayate would be fine.

Unexpectedly and while training on her own, Miyuki was poisoned and controlled by an enemy country spy, the salve-maker Otogiri. Chizuru became worried that Miyuki was out for so long and their master, the princess Kaede took it upon herself to "take a walk" at where Miyuki was last sighted, requesting an "escort" on Chizuru in order to investigate what happened to Miyuki. The two find the Sakurafubuki lying on the ground and then Miyuki herself who stabs Chizuru, mind controlled by Otogiri by using the darkness born within Miyuki's heart as a result of her brother's resentment. Kaede on Chizuru's insistence would flee the scene while Chizuru was held hostage.

Although Jiraiya and Hayate managed to free Miyuki of her mind control, during the battle, Miyuki unleashed great power which killed Jiraiya while Miyuki is weakened by the poison. Hayate upon learning from Kaede of the enemy spies travel in order to intercept them and rescue Chizuru. There they find Otogiri amongst the enemy ranks and try to save Chizuru. Miyuki who had barely recovered joins the fight and injures Otogiri, forcing her to use ancient techniques to summon and ancient warrior but is defeated although Miyuki also dies.

Blaming her insufficient parenting for the turn of events that led to the family's demise, Chizuru following Samurai code decided to take her own life by committing seppuku and requested Hayate to deliver the finishing strike. Devastated, he reluctantly agreed to her mother's request and as the last remaining member of their family to pass down the Ninja techniques to the next generation, soon after Chizuru dies. In her death, she left behind a crystal, containing her memories that can be called upon by those with the power of visions.

Chizuru is considered a rather competent Physical Damage unit for her base rarity, with serviceable stat boosts (mostly her ATK) and added evasion, great Counter and Limit Burst fill rate capabilities. Her abilities can perform multiple tasks, from Dispeling to Stop. The most noteworthy of these is Phantom Shadow which can serve as a decent Chain move that strikes all enemies, however it has difficulties in constructing a perfect chain while dual wielding and at 5 hits it has limited potential. Chizuru has more and more fallen from grace upon the release of more powerful units, he nonetheless remains fairly good in absence of some top tier damage dealers. Her Trust Master Reward is highly sought by many players since Katanas are a commonly used weapon.

A 4-6★ Rare Summon, Chizuru's role is Physical Damage. She has no natural element or status resistances.

Chizuru has no affinity to magic, and depending of her Rarity level, she has three (4★) or four (5-6★) ability slots. In her moveset, she has abilities used by the Samurai class throughout the series.

Chizuru's stats at her highest levels are as follows (with no passive abilities taken into account), along with the maximum amount of stat points that can be increased through pot-enhancements:

Chizuru can equip the following weapons: daggers and katanas.

Chizuru's Limit Bursts are of the damage-type. 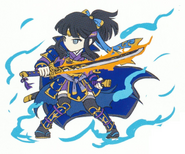