A technique that releases the spirit in the user's katana, which pursues the living as a band of blue flame.

Chirijiraden (乱の炎, Ran no Honō?, lit. Chaotic Flame), also known as Raging Inferno, is a recurring ability in the Final Fantasy series. It is commonly used by Ramza Beoulve.

Raging Inferno is the ability used when using Iaido with the Chirijiraden. It deals damage equal to 30 x the user's Magic to all enemies within the user's range, and costs 820 JP to learn (1000 in the PlayStation Portable and later versions of the game. 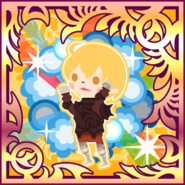 [view · edit · purge]The name, Chiriji-Raden-Kazari-Tsurugi (塵地螺鈿飾剣?), is not the name of a specific blacksmith known for making katanas, but refers to various design crafting processes used in Japan to provide finishing touches to weapons and their sheathings. Chiriji refers to a specific finishing polishing process in the craft of lacquering urushi made wares, where gold dust and flakes are sprinkled onto a coat of wet urushi, before having a clear coat layer painted atop of the gold coat, and then polished to reveal the decorative layer. This made efficient use of precious metals in early antiquity in Japan, as the process of heavy mining was not readily accessible in the period.[1]

Raden refers to the craft of nacre, or mother of pearl, inlay and carvings, used for decorating various works, from accessories and weapons to jewelry, furniture, and architecture. While intricate designs can be carved of mother of pearl, the material can also be used to coat scabbards in a plain, yet effective, fashion.[2]

Kazari is a verb that denotes "made of", or decorated. Gijo-tachi, or ceremonial and decorated swords used in the ranks of nobility from the Heian period, are also called kazari-tachi in modern times, and made the use of the aforementioned crafting skills for stunningly made works.[3]

Tsurugi describes double-edged swords of Japanese origin, and is a modern umbrella word to describe any sort of sword, regardless of design or make.

The name ultimately refers to the weapon's grandiose treatment and adoration, regardless of who created the weapon.