The Chimera Brain is an enemy from Final Fantasy X encountered in the northwestern area of the Calm Lands. It uses several magic attacks: a standard Lightning-based attack on par with Thundara, a Fire-based attack called Megiddo Flame, and Aqua Breath, which Kimahri can learn as a Ronso Rage. It also has a powerful physical attack. If bribed it will drop two Level 4 key spheres, a rare and useful item. 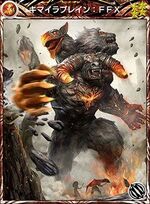 Retrieved from "https://finalfantasy.fandom.com/wiki/Chimera_Brain_(Final_Fantasy_X)?oldid=3231808"
Community content is available under CC-BY-SA unless otherwise noted.