Chimera (キマイラ, Kimaira?, キメラ, Kimera?) is an enemy in many Final Fantasy games. They are usually depicted as a monster made up of a lion, dragon, goat and snake. Most varieties of Chimera attack with Fire-based attacks.

Other types can use several types of elemental attacks, particularly in the later games. Common variants of the Chimera include the Chimera Brain, Chimerageist, Gorgimera and Rhyos. The Chimera family first appeared in the original Final Fantasy as an enemy at the Mirage Tower.

Chimeras are fought in the Mirage Tower, and a palette swap, Rhyos, appears in the past Chaos Shrine. In the GBA and following versions, a gray-furred version, the Mage Chimera, is found in the Whisperwind Cove. Its signature attack is Blaze.

Chimeras appear as a boss, guarding the spring where the player must deposit the Wyvern Egg and later as random encounters, usually in the Mysidian Tower. Rhyos and Chimera Sphinx also appear as palette swaps in the original, as well as Chimera Brain in the GBA and subsequent remakes.

Chimera is a regular enemy fought in the Tower of Babil. A green version, the Chimera Brain, appears as a random encounter in the Sealed Cave and the Chimera Geist only in the Lunar Ruins (GBA and PSP versions only). In addition, Edge's mother and father were stated by Rubicante to have been transformed into Chimeras by Dr. Lugae.

The Chimera can be encountered in the lower section of the Tower of Babil and Sealed Cave along with Chimera Brain.

Main article: Chimera (The After Years)

The Dhorme Chimera is a randomly encountered enemy fought in the desert near the Library of the Ancients. The Manticore is a boss fought at Gohn Meteorite. The Gorgimera is a stronger version that appears in the Interdimensional Rift.

A dummied version, the standard Chimera, appears with the use of cheats.

The Chimera is a random encounter that can cast dangerous spells, such as Aqua Breath, Snowstorm, Fireball, and Cyclonic. The Gorgimera, Vector Chimera, and Maximera are color variations, all fought in different locations.

There are three enemies related to the chimera. The Harpy (literally Chimera in Japan), appears in the desert surrounding the Gold Saucer in the Gold Saucer Area on the world map. Harpy is notable for being the earliest enemy to use Aqualung, an Enemy Skill. An orange variation, the Maximum Kimaira (Ultimate Chimera in FFRK), is fought later as a random encounter on the Mako Cannon in the unrevisitable areas of Midgar explored toward the end of Part 2. The Maximum Kimaira uses ice-elemental attacks.

The third Chimera-related enemy is not a third variation, but the Kimara Bug, named due to it sporting the heads of three different kinds of insect. The Kimara Bug appears as an encounter within the jungle field screens of Gongaga. The Kimara Bug uses physical attacks and can inflict Stop.

The Chimera is a random encounter fought in several places, the earliest found on the Dingo Desert, although it is a very rare encounter there. Each head corresponds with a different attack: the lion uses physical attacks, the lizard casts Aqua Breath, the hawk casts magic, and the snake head (on the tail) enforces status ailments. Chimera also has a Triple Triad card.

Chimera is a demon enemy fought in Memoria. It is one of the strongest enemies and can attack with Virus Crunch, which inflicts a party member with Virus.

Chimera is a randomly encountered enemy. The Chimera Brain is a variation appearing in the Calm Lands and the Chimerageist is an Area Conquest enemy.

Although there is no enemy named Chimera, the versions of the monster, Protochimera and Rhyos, are present. It takes 12 kills to Oversoul this type of fiend.

Khimairas are members of the Arcana family found exclusively in the form of Notorious Monsters. They were introduced in the Treasures of Aht Urhgan expansion.

The Chimera Brain is an enemy in the class of Cockatrice. They like to travel in packs. The Lesser Chimera and Gorgimera exist as other alternate colored versions and randomly encountered enemies.

Chimera is fought on the final day in Luxerion Cathedral, and it comes in its Final Fantasy XIV design. It is encountered as a mini-boss and later as a regular encounter.

The Chimera is a boss introduced in Patch 1.21, serving as the final boss of Cutter's Cry. The Chimera came to Cutter's Pass thirty years prior and slaughtered any traveling merchants entering its feeding grounds. The merchants hire the Darklight Raiders to kill the Chimera, only for the monster to nearly decimate the mercenaries with everyone believing it was killed off before it eventually resurfaced. In Patch 1.23, another Chimera is found in the skirmish zone of Turtleback Island, fought with several other enemies in a boss-rush fashion.

In A Realm Reborn, the Chimera reprises its role as the final boss of Cutter's Cry. It is also the basis of its own family of enemies. Notable members include the Gorgimera, target of the high-level FATE "Go, Go, Gorgimera" in Northern Thanalan, and the Dhorme Chimera, the boss of the trial "A Relic Reborn: The Chimera," part of the quest to acquire the Relic Weapons.

In Heavensward, Chimeras are revealed to be synthetic lifeforms created by the Allagan Empire at Azys Lla.

The Chimera appears as an obtainable SR monster. It is a Light-elemental monster whose type is Burst, class is Enchanted and its specialty is Tech. Its hero tech is Shining Blast which fires small seeker shots. Its leader bonus is Aurora which increases Light damage dealt by 50%. Its auto-effect is SOS Attack +30% which boosts Attack by 30% when below 30% HP.

Chimera is not an enemy but is mentioned in the errand "Hilltop Estate":

The chimera, once thought extinct, had indeed reappeared. Such an abomination—a foul creation bearing the features of countless beasts—could only have been wrought by the hand of man. It stands to reason that the chimera was the work of dark sorcery, and rumor would place responsibility on one of the townspeople. We managed to fell the beast in a battle that spanned some eight hours.

In a follow-up errand, "Pitiable Monster", it is discovered the chimera was the pet of a girl called Diara Luca.

Chimera appears as an enemy in Pazuzu's Tower, Mac's Ship, and Doom Castle. They can cast elemental spells and inflict status effects, but are ultimately not dangerous. In the Japanese version, the Gidrah boss is called Chimera, while the Chimera is called Trinity.

The Chimera is a boss found within Glaive Castle, guarding the Fuji's room. It attacks by shooting fireballs.

The Chimera is an enemy and a possible monster the party's monster unit(s) can transform into. It can be found on the sixteenth floor of the Tower.

The Chimera is an enemy and a possible monster the party's monster unit(s) can transform into.

Chimera appears in the Hunting Caves and Tower to the Sky in Part I, and in the Holy Tree Tower in Part II.

Chimera appears in the Lynari Desert and at Mount Vellenge. Theses are aggressive creatures that cast Thunder to paralyze the player. Their appearance is dramatically different from past Final Fantasy games.

Chimera appear in two different forms, Chimera and Chimaiga. Their appearance is different from how they looked in Final Fantasy Crystal Chronicles.

Main article: Chimera (My Life as a King)

Chimera are identical to their appearance in Final Fantasy Crystal Chronicles: Ring of Fates. They can inflict heavy damage with beams they shoot from their mouths which cause the player to become disoriented if hit.

Chimera is an enemy that comes in two forms.

Chimera is also a family:

The Chimera appears as an enemy.

Chimera from Final Fantasy VI.
Add a photo to this gallery

The Chimera appears in the Phantom Forest. Serving as the boss of both the story quests and exploration. It is also the boss battle in the Colosseum, beginner C-3. A much more powerful version, the Demon Chimera, appears as a trial boss after defeating the White Dragon. 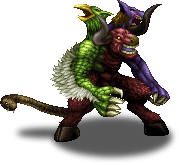 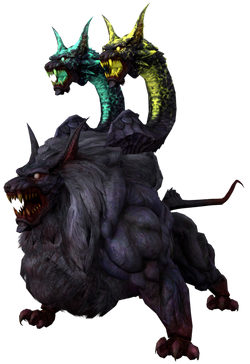 Chimera from Final Fantasy XIV appears with an ice-elemental card.

Final Fantasy XIV
Add a photo to this gallery

Chimera is a chance card, the card's ability: Pay 100G to warp back to the bank. 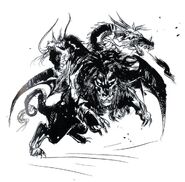 Final Fantasy Adventure artwork.
Add a photo to this gallery

Enemies
Retrieved from "https://finalfantasy.fandom.com/wiki/Chimera?oldid=3349575"
Community content is available under CC-BY-SA unless otherwise noted.