Detects by Sight
Detects by Sound
Hidden
List of Chigoe Enemies
Chigoe is a genus of enemies in Final Fantasy XI.

These small parasitic insects are the cause of an endemic disease in the Near East known as Chigoe Fever. Chigoes, or sand fleas, remain concealed beneath the sand until some unfortunate animal wanders past. The chigoe leaps an incredible distance to attach itself to the victim’s body, and then burrows under the skin to feed. The welts raised by these insidious pests are so painful, even a large animal can suffer a slow, wasting death when infested by enough parasites. According to the latest research by the Alchemists’ Guild, a virulent illness that once swept through Bastok is thought to have been the result of an invisible toxin transmitted through these deadly parasites.

Most chigoes can be instantly killed by any critical hit, weapon skill, or damage-inducing job ability, including Steps and Flourishes (even those which do no direct damage); however, doing so will often result in a failure to receive drops or experience from the kill. 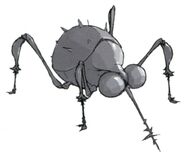 Concept art of a chigoe.