Minedi Sakamoto
The Cherubim is a light-elemental Eidolon in Final Fantasy Dimensions II. It can be obtained as a signet for Aemo by completing the first floor of Babil Tower.

The signet provides balanced stats to Aemo if obtained at the moment it becomes available in Chapter 1-1. However, due to it being an early game signet, it is outclassed by the signets obtained as the game progresses.

In the original free-to-play versions of the game, the Cherubim summon was a light-elemental signet that could only be obtained through the game's summon draw shop. However, it taught the Angel Whisper ability instead of the Angel Song ability. In the premium versions of the game, the Cherubim's Angel Whisper ability was removed from the game and replaced with the Angel Song ability. The Cherubim summon was an SS rank signet and could be equipped by any party member.

According to the official description from the free-to-play versions, the Cherubim is one of the high ranked angels. She is depicted in her signets as a multi-winged angelic figure in a tight jumpsuit with thigh high boots. As her signet evolves, the Cherubim's wings begin to grow and change colors, while her outfit does the same. She obtains a halo in her second signet art above her head, and in her final artwork her halo transforms into a mandorla halo.

The Cherubim's special attack is Angel Wing, restores the HP of all allies and raises their attack, magic, and speed for one turn. Summoning the Cherubim costs 2 bars from the Summon Gauge.

The following are the abilities Aemo can learn from the Cherubim: 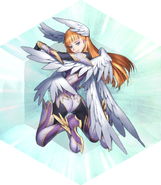 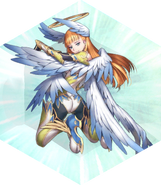 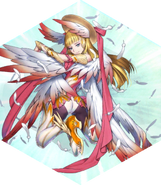 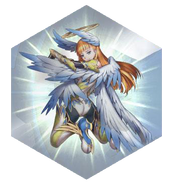 [view · edit · purge]A cherub is one of the unearthly beings who directly attend to God according to Abrahamic religions. The numerous depictions of cherubim assign to them many different roles; their original duty having been the protection of the Garden of Eden.