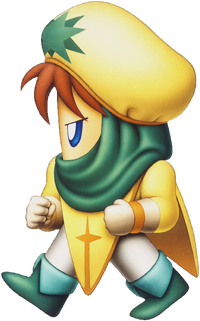 The secrets of the heart are the ultimate knowledge.

The Chemist (薬師, Kusurishi?, lit. Doctor or アイテム士, Aitemushi?, lit. Item Master), also known as Salve-Maker, is a job that appears in various games in the series. Chemists are often characterized as wearing yellow robes.

Their main weapons are daggers, guns, and rods. They are best known for their abilities involving various items. Usually, this involves having an exclusive access to special items, doubling the potency of recovery items, and most importantly, their unique ability Mix allows them to combine two items into one. They also can heal party members for free.

The Chemist job is a class obtained from the Earth Crystal. It specializes in recovery actions and the unique ability to mix items together to create special kinds of support and offensive moves.

The Chemist is a job that is available by default. It is the only job that is able to use items initially, and all magic-based jobs stem from the Chemist. Aerith is listed has having the Chemist job, despite not being a playable character. She even wears a similar headdress of the female Chemist.

The Salve-Maker job allows the character to heal all party members with the same item, use items without consuming them, and reverse the effects of healing i

In the Duel Colosseum, when selected, the Chemist job card will protect the player from status card effects, nullifying these and preventing them from appearing in the selection area.

The Chemist job card appears in the Labyrinth mode, and protects the player from status card effects, nullifying these and preventing them from appearing in the selection area.

The Chemist appears as a character card.

Chemist appeared as a silver card.

The Salve-Maker is an optional job obtained after defeating Qada in Starkfort. It is based on the Salve-Maker job from The 4 Heroes of Light. The Salve-Maker focuses primarily on the use of items for attack, defense, and support. Their signature ability is Compounding, which allows the Salve-Maker to combine two items for unique effects. They also have other abilities t hat increase the power of their items, allow for instant item use, or inflict damage on the enemy. The items they use can be obtained as enemy drops or from Norende once the player has constructed the appropriate shop.

Agnès and Tiz as Salve-Makers.

Concept artwork of Agnès as a Salve-Maker.

While Final Fantasy X has no official job system, Rikku has many traditional abilities of a Chemist: she can Use various items in battle, and her Overdrive Mix lets her combine two items to powerful effect.

In Final Fantasy X-2, the Alchemist dressphere is obtainable at the Chocobo Ranch any time during Chapter 2 and onwards. The Chemist auto-ability increases the potency of recovery items while the Alchemist can mix items together to create special abilities. The Stash command grants access to a select list of items to use without expending them from the party inventory.

The Transmuter job was intended to appear in Final Fantasy Tactics A2: Grimoire of the Rift for the nu mou. It would have mixed varying items for different effects. Due to the extensive amount of time required to test every ability, it was scrapped at the last moment. The Transmuter sprite can still be seen in auction houses and the Luck-Stick seller also resembles a nu mou with this job.

While Final Fantasy XI has no Chemist job available to players, the Trust Magic NPC Monberaux uses many recovery items and traditional Chemist mixes (as well as a few new ones).

Yunita as a Salve-Maker in Final Fantasy: The 4 Heroes of Light.

[view · edit · purge]A chemist is a scientist trained in the study of chemistry. Chemists study the composition of matter and its properties. The Japanese term kusuri-shi is literally "drug practitioner/technician", close to the common British English use of "chemist" to mean a compounding pharmacist.