Apothecaries who can mix powerful brews, and gain twice the benefit when drinking potions and ethers.

The Chemist is a job in Final Fantasy V obtained after the Earth Crystal shatters. It is primarily focused around using items better, and with its innate Pharmacology ability, doubles the effect of healing items (for instance, a simple Potion normally heals for 50 HP, but for a Chemist, heals for 100). This extends to its innate command, Drink, which allows the job to gain a stat boost by drinking a type of potion, as well as its learned command Mix, allowing them two mix up two items for a wide variety of attacks, ranging from offensive and defensive up to and including unique abilities that can only be done via Mix.

Given the proper tools, the Chemist can become the party's sole support character. On top of taking advantage of the various Mix abilities to cure and support the party, it learns abilities that can adequately replace White Magic. It is among the best self-buffing jobs, but suffers due to poor weapon equipment choices, making them ill-suited for physical combat.

Mastering Chemist on the whole party in the now defunct mobile and Steam versions earns the achievement "Trial and Error".

Chemists wear yellow robes and hats with a green star, and green scarves. Lenna's outfit in all versions, as well as Krile's in the defunct mobile/Steam version, have orange robes instead. The inspiration for the clothes may be based upon Middle Eastern area's history. The clothing seems to be inspired in the traditional Arabic clothes, due to the great development of sciences such as alchemy in Medieval Islam, the hats being reminiscent of turbans. The star emblem on the Chemists' hats can refer to the numerous alchemical star symbols, some of which portray the chemical elements.

Chemists have underwheming stats. Though they have a decent Stamina, boosting their HP, they boast neglible Strength and Agility bonuses. They have a small Magic penalty (this can be alleviated by equipping a magic skillset in their ability slot, if needed). Their low stats make them il-suited for physical combat.

Upon mastery, Freelancers and Mimes gain the Chemist's base Strength, Agility and Stamina unless they already have a higher base from another mastered job.

Different staves use different damage formulas: Light Staff, Staff of Judgment, and Sage Staff deal damage based on the attacker's Magic stat and the target's Magic Defense, while Staff, Flail, Morning Star, and Mace of Zeus use the axe damage formula, and benefit from Two-Handed. The best staves in most versions are Sage Staff (sealed weapon) and Judgment Staff (stolen from certain enemies). The even superior Mace of Zeus is found in the new post game dungeon added to the Game Boy Advance version: Sealed Temple. Many staves can be used as items to cast item magic.

The Chemist job's specific robe, Angel Robe, resists the poison ailment and makes the wearer immune to poison-elemental damage. It is found in Castle of Bal and bought from Phantom Village.

Drink lets the Chemist consume one of the following potions:

The potion will give a stat boost. The Chemist is not a high damage-dealing job, so the Drink ability can be put to good use by classes like Knight or Gladiator. Pharmacology doubles the effect of all curative items the character uses.

Mix is used to combine various items for a greater effect. Although many items that can be used for mixing can also be used on their own, there are three items specifically for use with the Mix command: Turtle Shell, Dragon Fang, and Dark Matter. Mix can be extremely turn-efficient to use, and if one knows the different item combinations, mixes can drastically change the course of a battle. 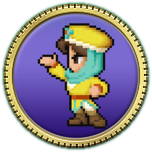 [view · edit · purge]A chemist is a scientist trained in the study of chemistry. Chemists study the composition of matter and its properties. The Japanese term kusuri-shi is literally "drug practitioner/technician", close to the common British English use of "chemist" to mean a compounding pharmacist.