Non-player character
Chelsea is a character in Before Crisis -Final Fantasy VII-, where she appears in Chapter 6. She is briefly Rude's girlfriend during the month of December at Midgar. December is a time of celebration, similar to the real-world Christmas, though it is never called this.

Rude, usually a shy and introverted person, meets Chelsea and comes to like her. He creates suspicion in his fellow Turks by disappearing after his shift is over. The player's Turk is sent to investigate, and finds Rude and Chelsea out on a date in Sector 8. Rude even buys Chelsea flowers from a flower girl.

When the Turk finds out, he or she tells Reno, who goes off to spy on them. Reno finds Chelsea fiddling with Rude's cellphone while Rude is at the bathroom. At the end of the date, Rude makes plans with Chelsea to go with her to see the tree light up. Reno continues to follow Chelsea, and discovers she is an AVALANCHE spy, and was ordered to place a wiretap on Rude's phone.

On December 24th, the day Rude and Chelsea were supposed to go see the tree, the Player Turk sees Chelsea meet with the AVALANCHE members. Chelsea's feelings for Rude are too great, and so she decides to betray AVALANCHE. The Player Turk defeats the AVALANCHE members and saves Chelsea, but she feels she can no longer stay with Rude, believing that enemies cannot be together. As she walks away, Chelsea wishes that she and Rude can meet again in the next life. The Player Turk goes to the tree to tell Rude Chelsea is not coming. 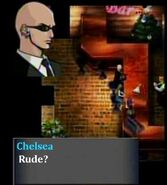