Chelinka is not a playable character in story mode, but in multiplayer mode the player can choose to be a female Clavat and their default appearance is Chelinka. Story-wise, Yuri and Chelinka cast magic together, and when Yuri does so in story mode, Chelinka is presumably assisting him.

Chelinka is a young Clavat with long blonde hair with with two parts tied in braids in the back and green eyes. She wears light orange and scarlet hooded overall shorts with a brown belt and a white long-sleeved shirt with orange triangle designs. She wears white tights and orange flats.

As a child, she had shorter hair and wore a long orange and yellow poncho. She had tan shorts with an orange patch on the back, brown tights underneath and orange shoes.

Chelinka is spirited and determined and combines a strong sense of justice with a softer, sensitive side. While she may flaunt her status as elder sibling, she actually finds the role intimidating as she has a fear of ghosts. Chelinka possesses a special crystal that gives her and Yuri the ability to perform magic, sort of like a crystal bearer.

Chelinka was born to Lady Aleria and Sir Latov as their first daughter. It is implied that she might have been captured for sacrifice if her mother had not offered herself instead.

After seeing their father murdered, Yuri and Chelinka used the powers of the crystal to scare off Cu Chaspel. Yuri was unaffected by the powerful magic, but it took a toll on Chelinka, putting her into a "crystal coma". Three years later, while Yuri was training his swordsman skills, Chelinka came out of the coma and spoke to him in telepathy. Chelinka continued to communicate telepathically to Yuri and the others until Yuri is near death at Rela Cyel.

Near the end of the story when Yuri nearly dies, Chelinka uses the rest of her power to create a new world, a world where the red moon event never happened, thus allowed Yuri and herself to live in the world that has the happiness they have always wanted.

If the player plays multiplayer and finishes the story mode, they can talk to Chelinka and Yuri, who talk about Yuri's cooking. Al walks in and it is obvious that Gnash has visited by the fact that there is an arrow taro on his head. If the player goes over to where Chelinka is after getting her pendant, a flash of light will make the Yuri from the events of the game disappear—connecting multiplayer to the regular story mode.

Chelinka appears as a non-playable character alongside Yuri. 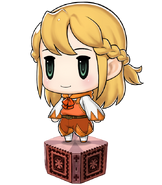 Chelinka with Yuri in the opening movie.