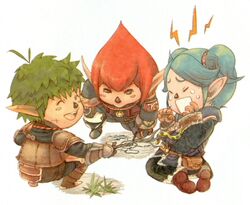 The Chebukki Brothers are a mischievous trio of Tarutaru who appear in the Final Fantasy XI: Chains of Promathia storyline. They are not "brothers" per se, as one of them is a sister.

This section about a character is empty or needs to be expanded. You can help the Final Fantasy Wiki by expanding it.
Template:FFXI
Retrieved from "https://finalfantasy.fandom.com/wiki/Chebukki_Siblings?oldid=1581889"
Community content is available under CC-BY-SA unless otherwise noted.