Chateau Leblanc is a location in Final Fantasy X-2, originally the Guado Mansion home to the leaders of Guadosalam during the events of Final Fantasy X.

It is where the Leblanc Syndicate reside, with Leblanc living in the room that used to belong to Seymour Guado, while Logos and Ormi's have their rooms in the secret underground maze where the syndicate has established a "mission" room with a Sphere Oscillo-finder and a "treasure" room, with spheres, and other acquisitions from other missions.

After Seymour attacked the Ronso, the Guado exiled themselves in the Macalania Woods. Leblanc set up her syndicate in Guadosalam with the manor, now renamed Chateau Leblanc, as her base of operations. After Leblanc and her gang infiltrate the Celsius to steal the half-sphere of the Zanarkand Ruins while the Gullwings were out giving the Awesome Sphere to one of the two Spiran parties, the Gullwings resolve to infiltrate Chateau Leblanc to reclaim the sphere.

After stealing some syndicate uniforms, YRP sneak in. After Yuna is ordered to massage Leblanc, she falls asleep, and Logos and Ormi order the girls to check on the switch, which leads to an underground maze. Brother contacts Rikku and talks loudly despite the ongoing covert operation. When Rikku reminds him, he only yells even louder, blowing their cover and Ormi discovers them. Ormi is defeated and flees.

The Gullwings find a dud sphere in Logos's room and are confronted by Logos and Ormi whom they defeat. Logos and Ormi flee to warn Leblanc, but meanwhile the Gullwings discover Leblanc already had the other half of the Zanarkand Sphere. Leblanc, Logos, and Ormi catch up with them and battle them one last time. They are defeated and Leblanc allows the Gullwings to see inside the now-restored Zanarkand Sphere, which shows the colossal machina, Vegnagun. Knowing that Vegnagun can destroy Spira, the groups put their differences aside and decide to investigate the Bevelle Underground together.

The Leblanc Syndicate may have stolen the Gullwings's hard-earned sphere, but you're going to sneak into Chateau Leblanc and steal it right back! Locate the Syndicate members deployed across Spira and relieve them of their clothing.

Nobody steals from the Gullwings! Break into Chateau Leblanc and take back what is rightfully yours!

Give Leblanc the massage of a lifetime! Watch her reaction and adjust your technique accordingly for peak pleasure.

Yuna has fifteen tries to reach thirty-two points and satisfy Leblanc. Select the body part to massage on the 3x3 grid with the control pad and press

Crimson Sphere 4 is found in the hidden area of Chateau Leblanc in either Chapter 3 or 5. At the hidden passageway, the player needs to enter the room with a circular door and climb the boxes to find the sphere in a chest at the end. The recording shows Kinoc briefing the groups ready to investigate the dangerous Den of Woe and Nooj, Baralai, Gippal and their recorder in the den surrounded by pyreflies while other squads are killing each other.

Crimson Sphere 10 is found in Guadosalam in Logos's room in Chateau Leblanc in Chapter 2. It is obtained as part of the storyline. It shows Ormi and Logos recording the results of the Crimson Squad selection expedition.

There exists a good AP farming technique that requires a "Turbo" controller or other controller that can be "taped down". It can be done almost anywhere in Spira, but because the enemy formations in Chateau Leblanc consist of three, or occasionally four, not-too-strong enemies, this area is the best.

The player should play through the area till they reach an inlet with a save sphere. The player can change the party's dresspheres to almost anything they like, but unless the characters have reached high enough levels that they can defeat all enemies in the enemy party before they get in a hit, one character should be a White Mage. The others should equip dresspheres that have the Attack command.

The player should set the cursor to memory and initiate the first battle (remembering to stay in the inlet near the save sphere), preferably by walking directly into the corner closest to the sphere. When the battle begins, the White Mage should use Pray, and the other characters attack. After the battle, the player should take a rubber bracelet (or something similar) and wrap it around the controller to hold down the

, take another one, and wrap around the controller's movement joystick so that Yuna is walking/running into the corner. Once started up, the game will keep going and the party will keep reeling in AP with little to no maintenance.

"Anything Goes for Leblanc!" from Final Fantasy X-2

The background music to Chateau Leblanc is "Anything Goes for Leblanc!". While in the hidden passageway, the music changes to "Three Mice in Chateau Leblanc". 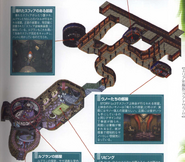 Spikes coming out of a wall.

Chateau is French for "castle".

[view · edit · purge]Leblanc (pronounced leh-blonk) is a contracted form of le blanc, "the white" in French. Blanc is the masculine form of the adjective; blanche is the feminine form.

Given her thieving nature, she may also be named after Maurice Leblanc, author of the novels about the master thief, Arsène Lupin.