Marcella Lentz-Pope (War of the Visions)

A knight of Grandshelt on active duty, and Rain and Lasswell's peer. Charlotte's stern and austere personality causes her to butt heads with the easygoing Rain, leaving Lasswell to bear the brunt of her complaints about his friend. The anxiety she felt after learning that her two comrades would set off on a dangerous journey was so acute that it materialized into a crystal, allowing those with the power of visions to summon her forth.

Charlotte is a supporting character and summonable unit from Final Fantasy Brave Exvius. A knight from the Kingdom of Grandshelt on active duty, she is Rain and Lasswell's compatriot and fellow commander, being in charge of its ground forces.

Charlotte is a young woman with blonde hair tied into a bun and wears a circlet (in her 4-6 star awakening) and has blue eyes (green in her sprite). She wears blue armor, blue boots, yellow skirt and a red cape (in her 4-6 star variant). She resembles Saber (Artoria Pendragon) from the Fate series, the main difference being her signature shield, the Patriot, which is a blue protective with golden adornments and given to her in honor of excelling both academically and in athletics.

In her Sacred Shield variant, Charlotte wears silver armor and has a new headgear, the Royal Circlet. Her hair is in an updo and adopts a right handed position, replacing the Patriot with the Honor of Grandshelt commissioned to her by the King. It is much larger than the Patriot, but the design is consistent. She uses a new larger, unnamed sword with a golden handle and a darkened middle section in the blade. When this sword is stored in her shield, the latter materializes wings, creating a massive protective barrier as seen when using her Limit Burst, Protector's Sacred Shield.

In her Guardian Blade Variant, she wears her long hair loose with a ponytail and retains the circlet, she wears the same outfit as her Sacred Shield variant but wears no armor and wears a black sleeveless top which exposes her navel. Her Brave Shift form wears the same armor as Loren but with blue details and wields two swords.

Charlotte is stern but with a caring side that she expresses through her concern for her comrades, Rain and Lasswell. While her austere demeanor causes her to butt heads against the nonchalant Rain, Charlotte secretly admires Lasswell's courage, though she considers that he always indulges Rain's whims.

Dedicated to her duty as a knight of Grandshelt, Charlotte never allows herself to hesitate. She is determined to fulfill her mission to the point of neglecting her own well-being, and tends to take too much upon herself. Charlotte is by all means a respected commander of Grandshelt, and enjoys high levels of popularity. Charlotte takes her duties as a Knight of Grandshelt very seriously and is willing to listen to the pleas of help of whoever may need them, despite the seemingly absurdity of some of the requests. She also proved an effective leader during the multi-national Lapis front against Dr. Lazarov.

Charlotte has feelings for Lasswell but has been unable to express them properly, in part because of Lasswell's adventures away from Grandshelt, her own workload along her rather workaholic nature and her own difficulty showing up more vulnerable sides of herself. She has however, learned to be more flexible and less stubborn than she used to be. She is noted to be a rather spartan instructor, being able to pull all nighters if needed.

Charlotte has a senior and junior relationship with Physalis who is her subordinate in the Knights of Grandshelt. The two are very good friends and frequently team up despite the fact that the two are fundamentally rivals in love for Lasswell's affections. Charlotte is mildly annoyed by Physalis' ability to blurt out her "love" for Lasswell yet without knowing of the implications of such claims and her denseness over her feelings, coupled with Charlotte's own difficulties making her the most painfully aware of the love triangle situation. Nonetheless, the two firmly believe in the power of emotions and their feelings for Lasswell have proved a source of strength that has allowed them to get out of many dire situations.

Charlotte is a member of the Grandshelt Royal Guard. She commands the kingdom's ground forces, and as such is Rain and Lasswell's peer. She met the two during their shared training days as squires; due to the three being evenly matched, they frequently sparred together, but as Rain often skipped training, Charlotte and Lasswell spent a lot of time together alone. Though Charlotte scolds Rain for his undisciplined behavior, through their shared service she has come to trust them both.

Following the destruction of the Earth Crystal and the siege on Grandshelt Castle by Veritas of the Dark, Rain and Lasswell set off to protect the remaining crystals. In their absence, Charlotte protects the people and monarchy, and has taken on their share of duties related to the reconstruction of Grandshelt. Unable to make peace with her worry towards the two knights, her emotions have crystallized, enabling her spirit to be summoned by those with the power of visions.

In the quest "A Knight of Grandshelt", Charlotte travels to the Aquapolis in the Olderion continent at the behest of the King of Grandshelt, so as to ask for aid in support of the kingdom's recovery and survey the state of affairs regarding the neighboring nations. Following her visit to the Olderion government, she meets with Rain, Lasswell, Lid and Fina, but shortly thereafter departs to Dirnado to obtain materials for rebuilding from the dwarves. The Dwarves' Forge is still overrun by monsters, and the party follows Charlotte to lend a hand, and find her injured as she had protected her soldiers from a Liquid Flame. When Rain and Lasswell tell her to return to the Capital she refuses and continues her mission to get supplies in Zadehl Westersand.

The party follows Charlotte's trail, only to find that she has once again put herself in danger to protect her squadron by drawing the monsters away from the wounded soldiers. When they find Charlotte Fina heals her, but she receives urgent orders to clear the Grandshelt Catacombs and leaves for the Isles, the party in tow. Although Lasswell is reluctant to assist Charlotte due to her pride, the party finds her protecting her men, and Lasswell is glad to find her unharmed. When he mentions that she is someone he cares about, Charlotte is surprised. Rain muses to Lid that they are both clueless when it comes to their feelings towards each other, but that it seems to be working all right for them.

The next day, Charlotte (now in charge of the town's affairs and repairs) is issuing orders to the soldiers when the party comes to bid her farewell. She tells Rain and Lasswell to leave the people and the king in her hands, so that they can focus on defeating the Sworn Six of Paladia, and specifically wishes Lasswell to have a safe journey.

Charlotte's job is listed as Knight, but her role is mainly that of a Tank, protecting her allies from damage, but she is also able to provide some Support or Healing. She can equip daggers, swords, staves, rods and maces, along with light shields, heavy shields, hats, helms, clothes, light armor, heavy armor and accessories.

She currently has two variants: "Charlotte" (3-6★), who is a physical tank, and "Holy Knight Charlotte" (5-7★), who defends against magic damage. The latter is her Season Two variant; as one of the so-called CG units, her Limit Burst ("Knight's Sacred Shield") is a special CG movie and has a powerful effect: it allows her to defend her allies from magic attacks and gives 40-50% damage mitigation to the party.

Charlotte appears as an enemy on the main story dungeons Grieving Knoll and Battlegrounds, and in the short story "Azure Soul and Crimson Blade". 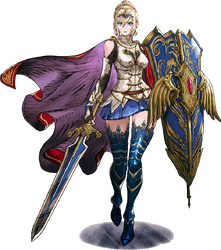 Charlotte appears as a summonable vision and optional playable character. She retains her original appearance. She serves as a character representative from Final Fantasy: Brave Exvius.

Charlotte, alongside Rain, Lasswell, Fina and Lid, appears in a Brave Frontier collaboration event as a limited-time unit, exclusive to the Global version. She was a free unit, awarded to all players who logged in to the game. In her artwork, she holds the weapon Lexida, which belongs to the Brave Frontier character Selena. 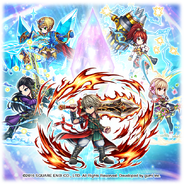 Charlotte is voiced by Marcella Lentz-Pope in the English version of Final Fantasy Brave Exvius: War of the Visions. 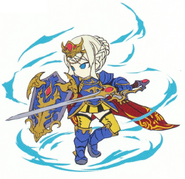 First Anniversary artwork from War of the Visions featuring Charlotte. 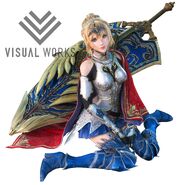 Charlotte is a French name, the feminine equivalent of Charles. [view · edit · purge]Charles comes from the German Karl and means "strong and virile" or "vigorous".