Cid Pollendina: Oh, shut up and help me remodel the Chappu page!
Please expand this article into a full one. The following tasks need to be completed:This request can be discussed on the associated discussion page. Remove this notice upon completion.

Being with your girl is good, but keeping Sin away from her is better.

Chappu was Wakka's younger brother before Final Fantasy X. According to Wakka, Tidus resembles Chappu, which is why he has an easy time bonding with him. Lulu is initially annoyed by this, seeing Wakka's taking Tidus under his wing as a sign Wakka clings to the past rather than trying to move on. Chappu appears before Wakka on the Farplane and, later on, before Lulu as well.

Chappu has short reddish-orange hair and blue eyes. He wears a blue headband similar to Wakka's around his head. He is said to resemble Tidus.

Chappu is said to be like Tidus, thus is presumed to be cheery and confident. In a last message to Wakka, he shows Independence asking Wakka to act like a older brother not as a parent. Chappu was also very attracted to Lulu and declared his love for her before joining the crusaders.

Chappu was raised in Besaid alongside his brother Wakka after their parents died. Wakka, being the elder brother, took care of him and tried to act more as a father than a brother. Both met Lulu and Yuna and at some time Chappu and Lulu entered a relationship.

Wakka gave Chappu a Brotherhood sword, but Chappu preferred to fight with an Al Bhed machina weapon (the reason Wakka came to resent them on a personal level). Chappu was a good friend of Luzzu and he convinced Chappu to enlist in the Crusaders to protect his girlfriend from Sin, but Lulu and Wakka never approved of this decision. Chappu said that once the Aurochs won the cup, he would propose to Lulu.

A year ago Chappu died somewhere near Djose, his body crushed and left on the shore.

Knock it off with the surrogate parent thing and give us both a break. I just need you to be my brother.

Wakka remembers that as a kid, Chappu told him about a sphere that showed their parents, and nervous about his future role as a father, he goes looking for it. With the Gullwings' help he finds a sphere, but not the one he was looking for. Instead, it shows various locations on Besaid Island. Wakka decides he does not want to see the sphere anyway, preferring the image of his parents he has in his head.

Chappu appears in a sphere given to Wakka by the Gullwings, given to them by Beclem, who was Chappu's war buddy. The sphere shows Chappu talking to Wakka about the sphere of their parents he found and told him he made the whole thing up. He told him of the days they spent as brothers and how Wakka always tried to be a parent to him, but Chappu wanted Wakka to just be his brother. 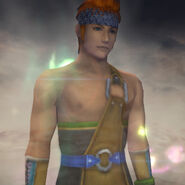